Westside School, an independent pre-K through eighth-grade school in southwest Seattle, had never lived in a home of its own. The school instead had adapted to and grown in spaces leased from area public school districts since its 1981 founding. But in 2013, with an ambitious academic and co-curricular program for 360 students in place, and a current lease nearing its expiration date, the school was ready to settle into a permanent home and create a facility designed around collaboration, creativity and community.

With its striking perpendicular arched structures, the Hillcrest Presbyterian Church complex had been nestled in a residential neighborhood near the school since the early 1970s. Two large-volume buildings—the sanctuary and a gym—were connected by a 1-story entry lobby. The 45-foot-tall soaring sanctuary was dramatic but drafty, a cavernous and energy-inefficient facility poorly insulated and expensive to heat for a dwindling congregation. An early childhood education program occupied space in the gym building, providing some daytime life and activity, but the complex sat mostly unused, and the site had become unsafe afterhours.

But Westside School saw in the well-worn church a possibility for rebirth. When the church found an opportunity to co-locate nearby, the school was ready to take on the retrofit of the buildings and create the educational space it needed. The vaulted wood roof structures of the church would be resurrected as a school—the new home for Westside School.

Transforming a Church into a School

As stewards of the next generation, Westside School was committed to reusing the existing church structure as much as possible and minimizing the embodied energy used in new construction. But how does one reinvent two large and drafty structures as a progressive, energy-efficient and modern educational facility?

The challenge involved repurposing the existing nave and gym space comprising the arched perpendicular wings of the church and connecting them with a new entry foyer so the seemingly separate spaces—old and new—could function as a unified school.

The church’s wishbone-shaped nave with its 45-foot glulam arches became the departure point for the design team’s imagination. Seattle-based Sundberg Kennedy Ly-Au Young Architects, commonly referred to as SKL, worked with the school community to determine the most effective and cost-efficient way to preserve and adapt the large spaces and arches, as well as accommodate programming functions the school required: classrooms, library, lunchroom, offices and storage, auditorium and gym. 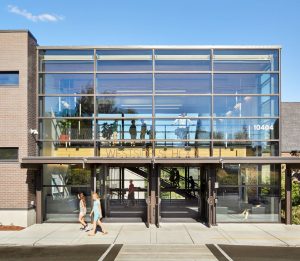 Inserting an educational program into the unique structure involved the reconfiguration of the existing 35,000 square feet comprising the church’s three buildings. Demolition stripped the nave building down to its core arched structure, removing flanking structure but preserving the flooring. The existing gym, with its smaller wishbone vault and wood floors, also was preserved. The 1-story entry building was demolished. In both preserved buildings, existing church offices, meeting spaces, daycare rooms and a kitchen were transformed into the classrooms, offices, support space, lunchroom and storage spaces the school needed. Dark basement hallways and spaces were brightened and lightened.

In the church’s nave, SKL architects advantaged the unique wishbone shell to create large open spaces for new school functions. The glulam beams were cleaned and left exposed to the ground level, serving as the building’s visible backbone. A new floor was inserted into the nave volume at what had been the choir loft level, providing around 8,500 square feet of classrooms below. The remaining vaulted 35-foot tall space was brightened with skylights and glazing to advantage north/south sun exposure and improve daylighting. Open gathering spaces were created in the 11,000 square feet of large volume area: a 450-person auditorium with rehearsal spaces at one end, an 1,100-square-foot Technology and Literacy Commons (library) and two language learning classrooms at the other. The arched ceiling now provides architectural drama in performing-arts spaces and light-filled open areas for the library.

A new central lobby and welcoming point was designed to further redefine the school. The new entry “Commons”—a 2-story glass box—links the two arched wings of the school and serves as the connection nexus: up, down, out, within and through. Upon entry, the transparency of the glass provides a view to the whole building, itself an education in the connection of old to new.

Architect Gladys Ly-Au Young, AIA, is a founding principal at Sundberg Kennedy Ly-Au Young Architects, Seattle. With a MSc in Sustainable Design from Carnegie Mellon University, Pittsburgh, she brings a deep commitment to sustainable design to her work.