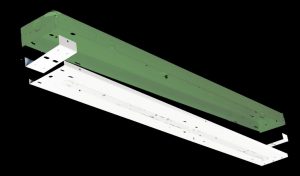 The RCL LED channel retrofit kit is suitable for most commercial, industrial and institutional applications.

If you’re looking to update your fluorescent strip luminaires, the RCL LED channel retrofit kit from LumenFocus is a solution.

With a variety of lumen packages, the RCL helps maximize energy savings. Along with its ease of installation, the RCL helps you cut down on cost and waste.

The kit is designed to replace strips in 2-, 3-, 4-, 6- and 8-foot lengths, with a customer-provided channel width. The RCL’s versatility makes it suitable for most commercial, industrial and institutional applications, including offices, retail locations, warehouses, coves and valences.

The RCL is brake-formed from cold rolled steel, and features a reflective white finish.

The RCL ships with all the necessary hardware included. Once the fluorescent luminaire is de-energized, remove the lamps, ballast cover, socket bars and sockets. The RCL’s mounting brackets are fastened at the end with screws. The pre-wired tray is fastened with a quarter-turn and two screws on each end. Each kit ships with an instruction sheet.

The RCL has a predicted L70 lifetime of 200,000 hours. It is UL 1598 listed for US and Canada, suitable for damp locations, and specific configurations are DesignLights Consortium qualified.

A 10-year extended warranty is available on certain models of the RCL.