For 30 fixtures in the warehouse, an "aisle lighter" optic was installed. This asymmetric lens design provides higher vertical foot-candles and more uniform light throw down the aisles of racking.

What do you do when you move your manufacturing and main distribution center into a new facility and your business is built on providing key components to LED lighting OEMs? Put your money where your mouth is! 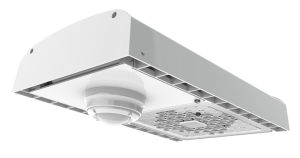 Thomas Research Products is a provider of LED drivers in North America, along with LED light engines, surge protectors for lighting and energy-saving lighting controls. The company’s main distribution center is at its corporate headquarters, where it maintains one of the larger inventories in the country. The facility also houses the main production line for many of the company’s controls, including the popular lighting surge protector products.

When TRP prepared to move into a larger 48,000-square-foot facility in Elgin, Ill., in the spring of 2014, the move presented an opportunity to relight the facility with LED luminaires. The existing lighting in the manufacturing, warehouse and shipping areas consisted of metal halide high bay fixtures. Each luminaire, almost 20 years old, consumed 458 watts, which meant that a lot of energy dollars were spent on lighting the space.

Vice President Greg Andrews started looking at options to change out the old HID lighting. He had experience overseeing a lighting overhaul at TRP’s previous facility three years earlier. He began by measuring the existing light in the Elgin facility before the company took possession of the building. The quality of the light reaching the floor was low with very uneven distribution. His primary goals for the project would be maximizing energy savings, increasing light levels and
improving the distribution of the light while reducing maintenance requirements.

Andrews could have gone with a fluorescent high bay solution. At 218 watts per fixture, that would have saved 240 watts each. However, that was not as effective as an LED solution. One of TRP’s customers is Precision-Paragon Lighting [P2], located in Yorba Linda, Calif. Joe Martin, general manager at [P2], suggested Andrews consider its QHC series LED high bay luminaire. It uses only 132 watts, which would mean saving over 325 watts per fixture! 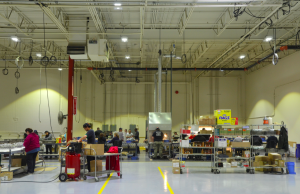 Occupancy sensors switch the fixtures off and on more often in the warehouse, where there are less people working.

The QHC fixture with 60 LED chips provides 12,483 lumens over 94 lumens per watt. The color temperature of the LED set is 5100K, close to natural daylight. The lightweight, compact housing is designed for simplified installation and maintenance with heat management engineered into the exterior. This design provides for long life, with a L95 (95 percent lumen maintenance) of greater than 60,000 hours. Because the manufacturing area in the facility will end up running two shifts, this means these fixtures will operate over seven years with no visible degradation in light levels.

This luminaire utilizes a 150W LED driver from TRP. The company’s high-performance drivers feature universal voltage input, operating on 100-277V mains. Therefore no step-down transformer was needed to connect the fixtures to the existing 277V circuits.

However, Andrews was conscious of even greater energy savings potential. “The best way to save money is to turn them off! So we chose to use the best occupancy sensors money can buy,” he says. The QHC high-bay design accepts an optional occupancy sensor directly on the fixture, the WASP2 high-mount occupancy sensor from Hubbell Building Automation. This lighting control uses passive infrared technology to provide simple on/off control, and includes a daylight sensor for when there is sufficient natural light. Andrews chose to have the WASP2 installed on each fixture.

Early on in this project, some people questioned installing occupancy sensors on luminaires in manufacturing. Andrews was not concerned because of the company’s previous retrofit experience. He knew that people move enough during production that the lights stay on as needed. The sensors switch the fixtures off and on more often in the warehouse, where there are less people working.

Because the LED luminaires would be used in areas with very different functions, Andrews chose optics appropriate for each area. For 30 fixtures in the warehouse, an “aisle lighter” optic was installed. This asymmetric lens design provides higher vertical foot-candles and more uniform light throw down the aisles of racking. For the fixtures to be installed in manufacturing and shipping, an open area optic provides maximum 360° area coverage. Both lens options on the QHC are Design Lights Consortium (DLC) listed. 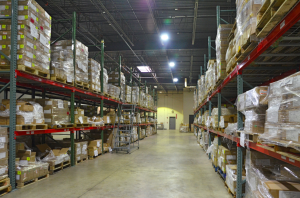 For 30 fixtures in the warehouse, an “aisle lighter” optic was installed. This asymmetric lens design provides higher vertical foot-candles and more uniform light throw down the aisles of racking.

Elgin electrical needs are served by Chicago-based Commonwealth Edison. The utility offers rebates to commercial customers, which made the retrofit installation financially attractive as well. The high efficiency of the chosen fixture qualified for an incentive of $0.50 per watt reduced. The occupancy sensors also qualified for an additional incentive, $0.12 per watt controlled by the devices.

In total, 100 LED luminaires were used in a 1-for-1 replacement of the original HID. The units were mounted at 20-feet above the floor, lighting almost 35,000 square feet of the building. Light levels were now double the original measurements. The distribution of the light was also much more uniform. Although the design of the QHC fixture does not provide any uplight, having the walls painted provided enough reflectivity to prevent the ceiling from being too dark. In the manufacturing area, the ceiling and floor were also painted, providing additional reflectivity. The building already had a number of skylights in both key areas, so daylight also provides light during primary business hours.

The results of the project have been well received by employees and visitors. “Yes, I’m pleased,” Andrews says. “It’s amazing how far the technology has come.” For this LED driver manufacturer, the move not only provided an opportunity to save energy and improves the quality of the light, but it also created an effective showcase for their own product.

EPA Recognizes MaxLite as an ENERGY STAR Partner of the Year