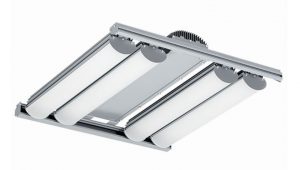 The Triple H LED highbay,lowbay is built to operate in temperatures up to 149F, designating it a LED highbay that can perform in extreme conditions.

Hubbell Lighting has announced that Hubbell Industrial Lighting has launched the Triple H LED highbay/lowbay, a high-efficacy fixture capable of 148 lumens per watt and a scalable light output from 15,000 to 60,000 lumens.

It is designed to replace HID fixtures up to 1000W. Hubbell Lighting studies show energy consumption has the potential to be reduced by 60 percent while virtually eliminating any need for maintenance.

It is available in both highbay and lowbay configurations and designed for hot or wet installations. Ranging from 15,000 lumens to 60,000 lumens, it is ideal to replace existing 1000 watt and 400 watt HID highbays in industrial locations. Because of the modular design and optical choices, the Triple H LED can light almost any area in industrial facilities.

Features and certifications of the Triple H LED highbay/lowbay:

Be the first to comment on "LED Highbay, Lowbay Operates in Extreme Conditions"