Las Vegas is the City of Lights, but environmentally responsible companies like MGM Resorts are looking for ways to reduce their energy consumption and their carbon footprint. The company has committed to completing a lighting upgrade in all its properties to make them more energy efficient by the end of 2017. 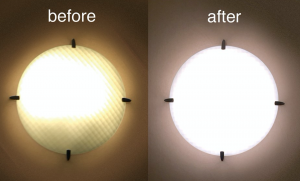 LEDs were chosen instead of new incandescent fixtures for New York-New York because they offered greater energy efficiency and better quality lighting.

As part of that initiative, the company needed to retrofit the luminaires in the New York-New York Casino and Resort. The hotel hallways particularly needed to be upgraded both for greater energy efficiency and better quality lighting. Las Vegas-based Roth Lighting was contracted to handle the retrofit, and after assessing the requirements of the project determined that LED Retrofit Kits from Fulham Co. Inc. would be an ideal solution. 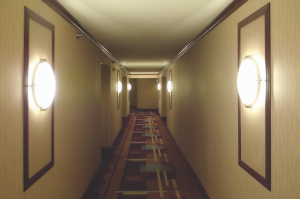 AFTER: Many guests complimented management on upgrading the carpeting and the wallpaper, when the only change was better lighting.

LEDs were chosen instead of new incandescent fixtures because they offered greater energy efficiency and better quality lighting. The LED fixtures would be more difficult to break and would emit brighter, full-spectrum light. Roth Lighting decided to standardize on the Fulham LED retrofit kits so they would have different types of LED retrofit kits available to accommodate multiple fixture designs. 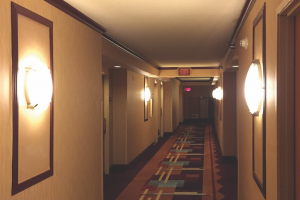 BEFORE: The resort’s hallways were dark with the previous incandescent lighting.

Most lighting fixtures would require new lighting fixtures, as well as LED drivers, but Fulham offers a series of UL-listed, field-installable LED retrofit kits in both linear and round configurations that would accommodate all the existing light fixtures. They were designed to be installed quickly and easily into the existing light fixtures without disrupting hotel operations. To minimize disruption and ensure the hotel remained operational 24 hours a day LED lighting was substituted in stages.

In all, more than 10,000 LED modules were installed and the results were an estimated energy saving of 30 percent of energy costs. The hotel also saved $32,000 in maintenance costs since the LED fixtures promised five times the useful operating life of the old incandescent fixtures. The LED luminaires were also less susceptible to vandalism than the previous incandescent luminaires, which was an important consideration in choosing LEDs for the retrofit. In addition, the LED fixtures are also much cooler to operate, putting less strain on the HVAC system which is a necessity in the Nevada desert.

As an added bonus, the superior quality of the LED lighting also gave the hotel a fresh look. Many of the guests complimented management on upgrading the carpeting and the wallpaper, when the only change was better lighting.

LED Bulb for Use in High-End Lighting Fixtures