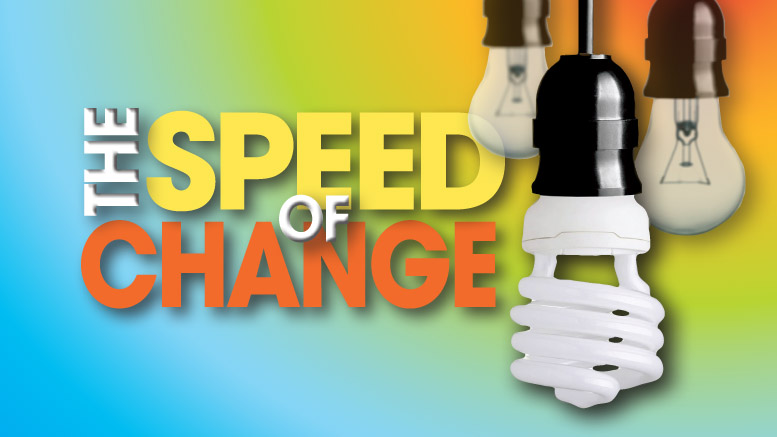 HERE’S WHAT FACILITY EXECUTIVES SHOULD KNOW BEFORE UPGRADING:

To suggest LED lighting has taken the building industry by storm is somewhat of an understatement. The market and technology are advancing at incredible rates—so much so it’s difficult for building executives to keep pace.

For starters, the scale of the LED lighting market is expected to jump from $25.7 billion in 2015 to $30.5 billion in 2016 with a penetration rate projected to climb from 31 percent in 2015 to 36 percent this year, according to the 2016 Global LED Lighting Market Trends Report by LEDinside, a market intelligence firm covering the global LED industry, including data, intelligence, LED adoption, prices, and buyer and seller information. “Internationally, LED markets are evolving at warp speed in terms of price and product quality,” explains Christine Egan, CEO of Washington, D.C.-based non-profit energy-efficiency advocate, CLASP. “In Europe, some quality-brand LED lamps on the market today are at price points that were only expected to be in shops in 2025.” In fact, LED technology’s lightning-quick growth caught many in the industry by surprise, according to Steve Kath, CLMC, president of the International Association of Lighting Management Companies (NALMCO), Ankeny, Iowa, in a recent message to the organization’s members.

“There have been great strides in performance while the costs have slowly come down, making it a widely accepted option for many,” Kath writes. “It has also opened the door for many new businesses.”

Increased competition has introduced additional challenges, however. “It’s always going to be frustrating because, right now, lighting [technology] is probably changing faster than cell phones,” suggests Chip Israel, FIALD, MIES, LEED AP, LC, and CEO and founder of the Long Beach, Calif.-based Lighting Design Alliance. As a result, many building owners who retrofit their facilities over time are discovering the technology they purchased only a short time ago is already obsolete, opening the door to compatibility issues with upgrades or renovations not far down the road.

Therefore, facility executives would be wise to take several factors into consideration to ensure their investment in LED lighting upgrades is a sound one.

Watch Out for Pitfalls

With the costs coming down as the quality and life cycles of fixtures are going up, LEDs are an attractive option for retrofitting existing buildings with more efficient lighting. Given that products like linear LED lamps (TLEDs) typically draw about 60 percent of the power that linear fluorescents do, according to the U.S. Department of Energy, Washington, D.C., TLEDs are a great way to achieve energy savings. However, considering energy efficiency alone is a mistake.

“One of the downfalls I think a lot of companies make is they just want to do LED because they think LED doesn’t use any energy and it lasts forever,” explains Randy Breske, CLMC, CSLC, CLEP, project manager at Eco Engineering Inc., Cincinnati. “They jump on that bandwagon with both feet and think it’s going to be the be-all and end-all. They don’t look at the entire big picture of what the impact of their retrofit on their facility will be—not only on their energy costs but maintenance costs, longevity of the system, the product [compatibility], things of that nature.”

Israel agrees and says in his experience, many clients are focused exclusively on re- ducing wattage and often don’t take other important lighting factors into consideration—a scenario that already played itself out when the industry switched from incandescent lamps to compact fluorescents.

“They saved a lot of energy, but the problem is the compact fluorescent didn’t have any candle power or it couldn’t punch the light down to the floor,” Israel notes. “All of a sudden the spaces appeared gloomy or they weren’t as bright as they used to be, so there were some trade-offs.”

Before considering LED products for a building retrofit, it’s important to remember: “Every product works very well in some applications; no product is going to work in every application, and I think that’s very important,” Israel says. Further, LEDs may not be the right solution for every environment, says Breske—especially those prone to extreme temperatures.

As such, Breske suggests facility executives develop a lighting upgrade strategy based on the big-picture need of the facility and take into consideration the tasks that are being performed and the number of hours the facility will be in operation daily, for example. He says clients need to ask a number of questions, including (but not limited to): What do you want the lighting system to do? What activities will be taking place in the space? Where are they being performed? How much light is necessary to perform those functions effectively?

Once the answers have been determined, the process of selecting the most appropriate lighting product is easier but not without some careful consideration. Breske says there’s a wide range of LED retrofit options for commercial buildings that can often be paired with controls for optimal performance.

UL Type A TLEDs, for example, have become a popular option because they work with existing inline ballasts. TLEDs are the easiest to install and don’t require any structural modifications (simply change the bulb). However, not every TLED is compatible with existing ballasts, which can cause them to fail. Also, Type A tubes are limited in their dimming and control capabilities. Efficiency is also sacrificed to some extent because of the loss of power from the existing ballast.