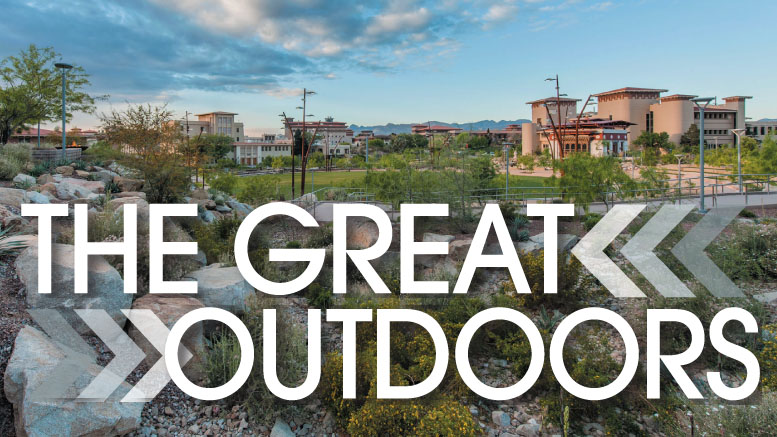 As a new administration took residence at 1600 Pennsylvania Avenue earlier this year, environmental scientists frantically moved U.S. climate data onto private servers amid fears the data might vanish under the Trump presidency. Noting his appointment of Cabinet members who have questioned the overwhelming scientific consensus around climate change, The Washington Post reported Trump “could try to alter or dismantle parts of the federal government’s repository of data on everything from rising sea levels to the number of wildfires in the country.” 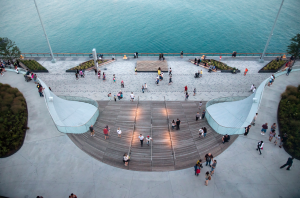 The POTUS fanned the flames of controversy by issuing gag orders against federal agencies, including the Washington, D.C.-based U.S. Environmental Protection Agency, U.S. Department of Energy and National Park Service, in an apparent attempt to silence them from communicating with the press about climate change. The plan backfired, however, and South Dakota’s Badlands National Park began tweeting out climate-change facts in direct opposition to the executive orders, inciting further debate.

Amid the political and media firestorm, however, the building industry has quietly continued its persistent march on the path to sustainable market transformation. Although the U.S. Green Building Council, Washington, has made incredible strides toward that end with its LEED Rating System (certified buildings are said to produce 34 percent lower carbon emissions, consume 25 percent less energy and 11 percent less water than traditional structures), energy-efficient buildings can’t fight the battle against climate change alone. Thankfully, landscape architecture professionals are joining the effort to enact mitigation strategies that will help reduce GHG emissions by 50 to 85 percent by 2050 and limit temperature rise to 2 degrees Celsius if deployed at a mass scale, according to the American Society of Landscape Architects (ASLA), Washington.

At the forefront of this movement toward “greening” our landscapes is the Sustainable SITES Initiative (SITES), a program based on the understanding that land is a crucial component of the built environment and can be planned, designed, developed, and maintained to avoid, mitigate, and even reverse the detrimental impacts of urbanization and development.

“Just like LEED transformed the built environment and the buildings market, SITES is intended to do the same thing for the landscapes and open spaces of the world we live in, in terms of driving sustainability in the design and development process,” explains Jamie Statter, vice president, Strategic Relationships at USGBC.

SITES was developed, in part, because of the disconnect that sometimes exists between LEED-certified buildings and the properties on which they are situated. 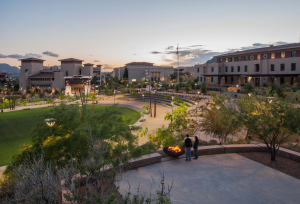 “We would see LEED platinum buildings with landscapes that really didn’t reflect the sustainability principles of the buildings themselves, so SITES is intended to address that,” Statter says. “It creates a sense of true sustainability in any project, and it does that by prioritizing ecosystem services and resource management at the land level.”

Unlike buildings, built landscapes and green infrastructure have the capacity to protect and even regenerate natural systems, thereby increasing the ecosystem services they provide, such as sequestering carbon, filtering air and water, and regulating climate, according to the Washington-based Green Building Certification Inc. (GBCI), which owns and manages SITES. Further, sustainable landscapes create ecologically resilient communities better able to withstand and recover from episodic floods, droughts, wildfires and other catastrophic events.

Rather than compete with one another, however, SITES and LEED—also owned and managed by GBCI—are designed to cooperate in creating greater opportunities to transform properties and strengthen the vitality of communities and ecosystems as a whole.

“The SITES and LEED [rating systems] are now officially interacting and are able to overlap,” Statter notes. “So projects pursuing SITES and LEED can take advantage of credit equivalencies. What that means is if they get a credit in LEED, they can also automatically get that accredited in SITES, and the same is true in the reverse direction.”

Now in its second iteration (better known as v2), SITES is quite similar to LEED in that it is based on a points system. The number of credits a project earns determines its level of certification—Certified, Silver, Gold or Platinum (see table for a breakdown of points). 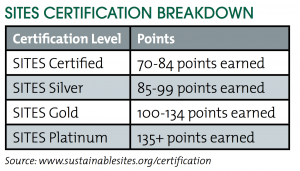 The number of credits a project earns determines its level of SITES certification—Certified, Silver, Gold or Platinum.

Any physical location or land on which a project is developed can be considered for SITES. This applies to new construction proj- ects and existing sites that include major renovations. While there is no maximum size requirement for a project to participate in SITES, a 2,000-square-foot minimum prerequisite must be met to be eligible.
1 2 3

Be the first to comment on "What LEED Did for Buildings, Sustainable SITES Will Do for Landscapes—and Not a Moment Too Soon"