Twenty years ago, the word “sustainability” wasn’t in most people’s lexicons and, in fact, only a handful of visionaries were talking about creating a new industrial revolution centered around the natural environment. But as a spark fanned into flame, people like Atlanta-based Interface’s late founder Ray Anderson caught the vision and began to transform their businesses, and a small group of dreamers—David Gottfried, Rick Fedrizzi and Mike Italiano—formed a small non-profit known as the U.S. Green Building Council (USGBC), Washington, D.C., to promote sustainability in how buildings are designed, built and operated.

Sustainability has since become a household word, and the USGBC estimates it now certifies roughly 1.5 million feet of space per day with more than 182,000 residential and commercial projects participating in its suite of rating systems to date.

USGBC celebrated its 20th anniversary in April, and as the fourth iteration of its successful Leadership in Energy and Environmental Design (LEED) rating system is set for release in conjunction with its Greenbuild Conference & Expo in November, it is fitting to examine the current trends in sustainable design and identify the challenges facing the green-building movement in the years ahead, particularly as it relates to retrofitting interiors. 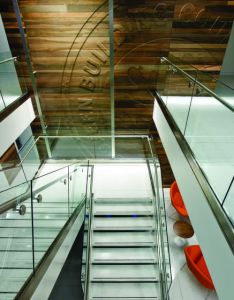 Although it’s not exactly a trend, per se, every practicing green-building professional has his or her sights set on the launch of LEED v4 and how it will impact green-building practices in the years ahead. (View a draft of LEED v4 Materials & Resources credits.)

“We have a new mountain peak we’re focused on,” explains Holley Henderson, LEED fellow, founder of interior design firm H2 Ecodesign, Atlanta, and author of Becoming a Green Building Professional (Wiley). “One of the challenges is going to be balancing [LEED v4] with where the economy truly is and where projects literally are and striving for this new market transformation relative to sustainability.”

Henderson, who is also vice chair of the LEED Market Advisory Committee (and thereby also on the LEED Steering Committee), notes with the launch of the new rating system, “real-time energy and water data will be important for building operators to truly understand and improve their performance. I think that’s what LEED v4 encourages the market to do.”

Unfortunately, not everyone in the market shares in the excitement about the most recent revisions to the rating system. “LEED v4 is a lot more complex than what we’ve seen before, and I know there has been a lot of criticism from people who don’t like it and a lot of owners and designers who use it,” says Jean Hansen, LEED fellow, sustainable interiors manager and senior professional associate at HDR Architecture Inc., San Francisco.

For example, USGBC received pushback from the industry last year when it planned to launch the new rating system under the name “LEED 2012.” The organization had to postpone its release in part because the implementation process was overly complicated. The Materials & Resources (M&R) category also received a large number of comments during the public comment period because the new credit requirements
impact the market significantly, especially on the part of manufacturer groups who have been very vocal about the new changes. In fact, the Washington-based American Chemistry Council (ACC) reportedly insisted the USGBC remove certain credits from the M&R category and the ACC threatened to wield its influence to ensure government agencies stop using the rating system altogether, according to Senior Vice President for LEED Scott Horst.

Choosing a Building-automation System for Your Next Retrofit Project