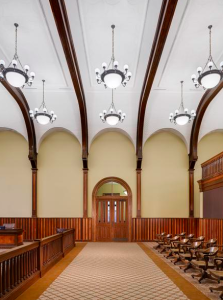 The drop ceiling and HVAC components were removed and the 27-foot-high ceiling, including the millwork and tin ceiling, was restored.

The Livingston County Courthouse has anchored the downtown of Pontiac, Ill., since 1875. Designed in the Second Empire style by Chicago architect John C. Cochrane, the courthouse is a 2-story, symmetrical structure with corner towers and a central clock tower that was added in 1892. With its prominent location and distinctive architecture, the building was added to the National Register of Historic Places in 1986 and has long been a source of community pride.

Despite its beautiful exterior and park-like setting, the Livingston County Courthouse was much in need of repair and restoration after well more than a century of use. The exterior had been restored in 2001, but the interior had not been upgraded since a 1970s remodel. The building was, in a sense, “bursting at the seams” with courtrooms, jury rooms, judges’ chambers, holding cells, county offices and meeting rooms all serving a busy roster of municipal justice and county administration functions.

The well-worn interior required an extensive renovation. ADA and life-safety improvements were needed to bring the facility into code compliance. The HVAC system was outdated and finishes were in need of repair or replacement. On the upper level, the 1970s remodeling had carved the grand, full-floor courtroom into three smaller courtrooms with cramped, low-ceilinged spaces for jury deliberations and other judicial support functions.

Post-9-11 security measures led to the closing of entrances on three of the building’s four sides, channeling visitors through unsightly security measures at the main entrance. The courthouse was crowded, dark and showing its age. The once-proud structure required not only comprehensive upgrades, but a thoughtful restoration approach that would return the courthouse to its former glory.

With little historical information to guide them, the design team relied on modern technology—namely laser scanning—to assist in returning the courthouse to its original grandeur while providing modern upgrades.

Scans of the space above the existing drop ceiling show the original arched windows and barrel-vaulted ceiling. Image: Dewberry

Following a long-range plan for improving the security, capacity and quality of its justice facilities, Livingston County administrators oversaw the construction of a new law and justice center on a site adjacent to the historic courthouse. Designed by the Elgin, Ill., office of Dewberry, the new facility opened in 2011 and enabled the county to relocate its judicial functions. Planning already was in progress for the renovation of the existing courthouse, which would continue to accommodate administrative offices and meeting space for the county board.

An all-day planning session took place in early 2009 with Dewberry’s architectural team meeting with county staff to discuss space needs within the old courthouse. Toward the end of the day, the architectural team walked through the building and found Associate Judge Robert M. Travers sitting in his chamber on the second floor. In talking with the architects, Judge Travers, who had worked in the courthouse since 1977, recalled the original 27-foot-high ceiling still remained above the suspended acoustical ceilings that had been in place since the last remodel.

Daniel Atilano, AIA, LEED AP BD+C, is a principal in the Elgin, Ill., office of Dewberry. The recipient of numerous design awards from the American Institute of Architects, he has designed many landmark municipal buildings, including historic preservation and adaptive reuse projects. Brad Moser is an architect with Dewberry’s Elgin, Ill., office. He has designed and managed many award-winning municipal and institutional projects, including complex renovations.