The view of the sign from the south freeway.

Every day, more than 300,000 motorists pass by the electronic sign alongside Interstate 110 that announces coming events at the Los Angeles Coliseum and the Sports Arena, a venue listed on the National Register of Historic Places and the only stadium to host two Olympic Games (1932 and 1984), two Super Bowls (including the first in 1967), a World Series and a host of major concerts, as well as mass political and religious events. 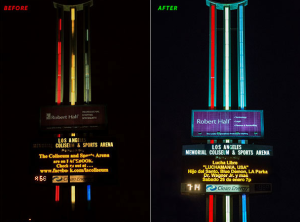 Pervaiz Lodhie was one of those motorists some months ago, driving up the Harbor Freeway, just south of downtown Los Angeles. “This is an iconic marquee on a key north-south transportation corridor that connects Los Angeles’ central business district and the Port of Los Angeles,” Lodhie remarks. “And yet, since the [1984] Olympics, I’ve seen the sign deteriorate in light quality, consistency and brightness.”

One particular day Lodhie decided it was time to do something to bring the sign back from disrepair and to improve the image of the city and one of its world-renowned assets. “After living the immigrant success story, it was time to give back to the community,” he says. Lodhie is founder and president of LEDtronics, a solid-state lighting design and manufacturing company.

“With some quick and dirty math, the freeway sign is consuming almost 300 KwH less per day—nearly a 57 percent reduction in daily consumption,” notes Robert C. Joyner, head of the commission’s Stadium Operations and Special Projects. “This dramatic overall reduction is exclusive to these 160 vertically mounted LED tubes. It started in September 2012 and continued to dip through December as we replaced those old fluorescent bulbs illuminating the vertical red, white and blue stripes with the LED tube replacements donated by LEDtronics.” At an average cost of 20 cents per KwH, Joyner estimates the energy savings amount roughly to $1,800 per month, or nearly $20,000 per year.

“I am glad this replacement project completed both its objectives: to reduce our overall electrical consumption and to improve the sign’s aesthetics for the public,” he adds. 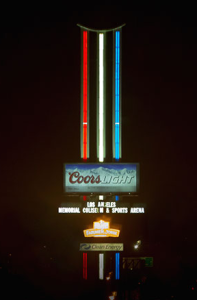 The view of the sign from the south freeway.

The 8-foot LED T8 tube lights consume only 36 watts of power and replace fluorescent lamps that consume up to 60 watts. In addition to energy savings, LED T8 tube lights last up to 50,000 hours with a maximum degradation of only 30 percent in the harsh outdoor environment.

The upgraded electronic message board sits on the east side of the Harbor Freeway and provides a total of 3,000 square feet of off-site signage for Coliseum and Sports Arena events, as well as commercial advertising. The marquee is elevated some 45 feet from the ground.

“Whenever I drive by the freeway sign nowadays, I feel glad at what a bit of new technology can do to lift up one’s civic pride and to affirm one’s belief in the American Dream,” remarks Lodhie. “The Los Angeles Memorial Coliseum was dedicated in 1923 to honor World War I veterans. What better way to keep that message alive than with an electronic marquee that gleams with red, white and blue lights to thousands of freeway drivers every single day?”