The Retrofit of a Historic Home Masterfully Blends Art and Architecture

Gary Knutson’s passion for art and appreciation of fine craftsmanship pervade every aspect of the historic mansion he owns in the Lakes District of Minneapolis.

After retiring from his position as a partner for the Howard Merrell Agency in Raleigh, N.C. Knutson decided to return to Minnesota. “I always intended to move back,” says Knutson, a native Minnesotan who spent the first half of his career in the Twin Cities.

At first, finding then retrofitting a residence to serve Knutson’s full range of interests proved to be a formidable challenge. He asked a realtor to send him multiple listing sheets. By the time he’d culled through these and decided which he liked best the homes were sold. So when a residence overlooking Lake Calhoun caught his eye, Knutson acted immediately. However, there was one major drawback: The house had fallen into disrepair.

“Vujovich listened carefully and I liked that,” Knutson says. “I’m fastidious when it comes to design and authenticity. Even though Vujovich’s team has done great work, almost every detail is mine.” 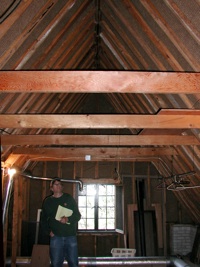 Knutson’s top priority was to remodel the home’s dark, poorly insulated and under-utilized attic into an art studio. Vujovich Design Build’s team began by removing old insulation and debris, then constructing a large gable to bring in more natural light and provide an expansive view of the nearby lake and parkway.

“The attic had been claustrophobic,” Knutson says. “Adding a gable opened up the entire room.” To accomplish this, the Vujovich Design Build crew visually inspected the roof, saw there was little wear and decided to remove then reinstall the clay tiles, which can last for a century or more. Luckily, only two tiles were damaged during disassembly, so Vujovich Design Build had enough to recover the roof without needing to have any tile fabricated to match what was there.

A 9,000-square-foot Rectilinear Box within a Modernist Building Is Transformed into a Calming Space for Toronto’s GBTQ Community

Handmade Tiles Are Made of More Than 70 Percent Recycled Content

Be the first to comment on "Magnificent Mansion Makeover"