“THE THING ALWAYS HAPPENS THAT YOU REALLY BELIEVE IN, AND THE BELIEF IN A THING MAKES IT HAPPEN.” —Frank Lloyd Wright, American architect

Wright’s famous quote fittingly adorns a wall of plaques honoring the design and construction team, financial institutions and donors who believed in the restoration of the Historic Park Inn Hotel. Located in Mason City, Iowa, a city of approximately 28,000 people that also is the hometown of Meredith Willson, the playwright and composer of The Music Man, the Historic Park Inn Hotel gives Mason City another claim to fame. 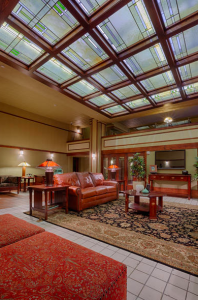 The original art glass panels that appear in the skylight room were found in the ceiling of a local doctor’s home. PHOTO: Aaron Thomas

Opened to the public in 1910, it is the last-remaining hotel in the world designed by Frank Lloyd Wright. Unfortunately, the hotel’s checkered past and the fact that it had been abandoned for more than 30 years nearly ensured its doom.

If it hadn’t been for a committed group of citizens who recognized the architectural jewel their city had and tirelessly sought funding (about $20 million), the restoration of the hotel probably would never have come to fruition. Thanks to their efforts, however, a dedicated restoration team consisting of local building professionals and skilled artisans successfully recreated Wright’s original intent—often with little to guide them—with more than a little luck and many unexpected discoveries along the way.

In the early 1900s, Mason City attorneys James Blythe and J.E.E. Markley were board members of the local City National Bank, which was booming thanks to an economy steeped in farming and meatpacking, as well as brick and tile manufacturing. The bank was planning an expansion, and the attorneys saw an opportunity to build the new bank, create law offices for themselves and build a hotel—all in one building. Coincidentally, Markley’s daughters were attending private school in Spring Green, Wis., the hometown of Frank Lloyd Wright’s mother and a place where Wright spent his childhood summers. Wright actually had designed a building for the private school, and Markley was impressed with the design.

Wright was commissioned by the attorneys and came to Mason City to oversee construction of the City National Bank and Park Inn Hotel. The building would be located on prime property in the downtown area; the bank side would have an entry on the east street while the hotel entrance would overlook Central Park to the north. In a strange turn of events, in 1909, Wright abandoned his family in Oak Park, Ill., and moved to Europe with another client’s wife. The scandal nearly brought the construction of the bank/hotel project to an end. Fortunately, one of Wright’s associates was able to oversee the building’s completion. It’s unclear whether Wright ever returned to Mason City to see the finished project. If he did return, citizens didn’t care.

“It’s my opinion that enough people were disgusted with that part of Wright’s private life that when the hotel opened, the citizens of Mason City were just happy it was done,” explains Scott Borcherding, IIDA, principal and interior designer for the restoration architect, Bergland + Cram, Mason City. “They probably said ‘We’re not going to glorify anything about that place’.” 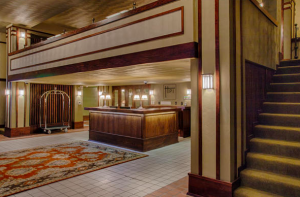 The design and construction team wondered whether the lobby’s mezzanine had ever existed. It appeared in Frank Lloyd Wright’s original drawings but not in the interior photograph from the 1930s. After some demolition, the team discovered the original beam pockets. PHOTO: Aaron Thomas

The future was just as unkind to the property. Less than 10 years after the Park Inn Hotel opened, a new hotel (that today is senior housing) was built a couple blocks away and offered private baths with each room; the Park Inn Hotel offered only shared bathrooms, making it a less desirable place to stay. Then, the 1920s brought a farm crisis that led to City National Bank’s bankruptcy and closure. Over the years, the bank space was remodeled into retail and office space several times, allowing it to continue to serve the city. Meanwhile, the hotel struggled.

“In the late 1960s to the ’70s, things really turned. Mason City’s downtown was deteriorating,” explains Jean Marinos, finance director for the non-profit Wright on the Park, which owns the Historic Park Inn Hotel building. “One of my friends remembers her mom would never let her walk on the side of the street the hotel was on because evidently there was a lot of stuff going on there that was not necessarily good.”

Before it was abandoned in the 1970s, the hotel briefly served as apartments. Then, its basement slowly deteriorated because of water and mold, and pigeons moved into the upper floors. Frank Lloyd Wright’s design became an eyesore.

What a Difference a Year Can Make