Black gold drew thousands of people to Tulsa, Okla., at the beginning of the 20th century. By 1930, Tulsa had been christened the “Oil Capital of the World” and its more than 70,000 citizens were enjoying the spoils of wealth. The city created parks and rose gardens while its prosperous citizens invested in the construction of mansions, churches and museums. In the 1950s, Tulsa achieved another nickname: “America’s Most Beautiful City”. 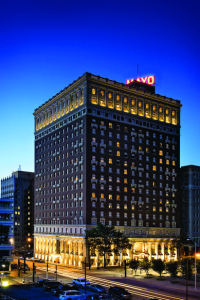 The 19-story Mayo hotel was the tallest building in Oklahoma when it was built in 1925. PHOTO: John Amatucci

However, as quickly as Tulsa’s citizens achieved riches from oil, they experienced sudden loss when the wells went dry in the early 1980s. Houston consequently took the title of “Oil Capital of the World”. “Everyone just packed up their bags and went to Houston,” remembers Joel Slaughter, co-owner of Phillips Slaughter Rose Inc., a Tulsa-based architecture, engineering and construction firm. “Tulsa just about died, so the city had to diversify into different industries.”

As part of its diversification, Tulsa’s leaders began seeking convention and entertainment business. The Cox Business Center (previously known as the Tulsa Convention Center), built in 1964, received a $42 million renovation, and the 19,199-seat BOK Center, which hosts indoor sports and entertainment events, was opened in 2008. With new event opportunities downtown, it was necessary to provide hotel rooms and amenities to the city’s visitors.

Unfortunately, after the oil bust, Tulsa’s downtown had become somewhat of a ghost town and many of its buildings stood vacant, becoming havens for trespassing people and animals. One of these vacant buildings was the once opulent Mayo Hotel. The 19-story hotel was the tallest building in Oklahoma when it was built in 1925. Its 600 rooms boasted ceiling fans and running ice water to beat the summer heat. Oil tycoons conducted business in the hotel, and celebrities—Charles Lindbergh, Babe Ruth, Lucille Ball and President John F. Kennedy—were known to dance the night away in the famous Crystal Ballroom at the top of the hotel.

As a result of Tulsa’s economic downturn, the Mayo Hotel closed its doors in 1981 and successfully escaped the wrecking ball for 30 years. In 1995, Slaughter and his business partner Paul Rose entered the abandoned hotel to do a structural study, and they couldn’t believe their eyes. “The building was full of trash and dead birds and graffiti,” Slaughter remembers. “The lower basement had 3 feet of water in it. We went upstairs to the Crystal Ballroom and it was even worse. The Mayo’s doors were stacked from one side of the room almost to the middle and were rotting. Pigeons were roosting in the ballroom and their droppings were probably 4-feet deep on the floor. The windows were boarded up. The plaster was damaged and falling down. We could smell mold and mildew. I remember thinking somebody has to do something about this. It was sad. Twelve years later, we were redoing it.” 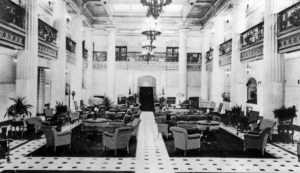 After six failed renovation attempts, including one that devised to turn the Mayo Hotel into an office tower, Brickhugger LLC, a local commercial development and real-estate company, bought the 285,000-square-foot building in 2001 for $250,000. Several years passed as Brickhugger, which is named for its propensity to save buildings from being torn down, developed a plan and obtained financing. A portion of funding for the $42 million project came from Tulsa County Vision 2025, a package designed to improve community infrastructure and funded by a 1-cent county sales tax increase passed in 2003. Additional funding for the Mayo’s renovation came from historic tax credits (the hotel was listed on the National Register of Historic Places in 1980), Brickhugger and additional investors, as well as creative financing during the rehabilitation.

According to Slaughter, once the team came together, the design-build project moved at a quick pace. “The entire project took 22 months from the time we got the go-ahead to start working until it opened,” Slaughter recalls. “There were six of us working on the project from our company, so we moved into the hotel. We were there onsite for a year and a half.”

Slaughter says the rapid pace was achievable because the project was like traveling back in time “when architects actually built buildings”. He adds: “The drawings were not always complete to a detail level, so, as the construction manager, we’d walk up to the subcontractors and actually draw on the wall what they were supposed to build. There was no change process or arguing about numbers and going back to the architect because the architect and engineer also was the builder.”

Be the first to comment on "The Mayo Hotel, Once the Center of the Society Scene in Tulsa, Okla., Rises Once More to Host Opulent Occasions"