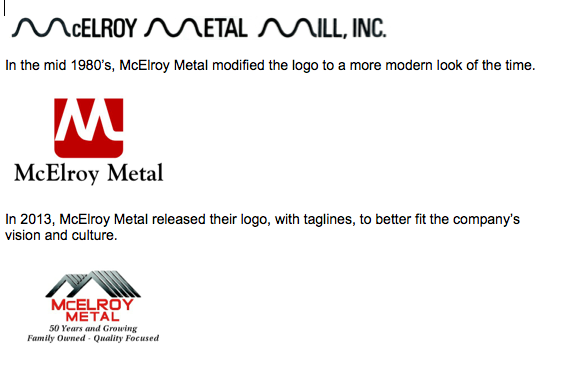 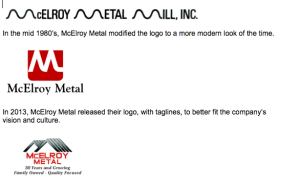 McElroy Metal, celebrating its 50th anniversary in 2013, has released a new logo.

“Our old logo served us well but was outdated,” says President Ian McElroy. “Our new logo design gives us a fresher look, plus the artwork adds an element that showcases our business.”

Three generations of the McElroy family have guided the company through periods of growth. In 1963, Thomas E. McElroy Sr., known as Mr. Mac, founded McElroy Metal Mill in Shreveport, La. Four years later, the company moved into a new industrial park across the river in Bossier City, a location that still serves as the corporate headquarters as well as the Southwestern Division of McElroy Metal.

In 1970, Mr. Mac’s son, Tem McElroy, joined McElroy Metal Mill after working as a consultant in the computer industry. One of Tem’s earliest initiatives was implementing the company’s first computer system, interestingly enough, while the senior McElroy was on vacation. Staff members thought computerization was an awful idea and begged Tem to remove the system. He held firm and McElroy Metal Mill entered the computer age.

Mr. Mac retired in 1975 and Tem McElroy took over the reins of president. He soon implemented his vision to turn McElroy Metal into a national company. The company’s first satellite manufacturing facility was built and opened in Clinton, Ill., just a year later.

In 1999, Ian McElroy, Tem’s son, became the third-generation McElroy to join the company, bringing experience from Wall Street and an MBA from the University of Texas. Ian McElroy moved into the position of company president in 2007 as Tem became the company chairman. Under Ian’s leadership, the company has bolstered its position in the marketplace via acquisitions and joint ventures, including the following:

While McElroy Metal has grown dramatically during the past 50 years, the company’s family culture has remained constant and McElroy Metal continues to have the feel of a small company. All three generations of the McElroy family value relationships with customers, vendors and employees. Tem McElroy, chairman of McElroy Metal, states: “While it was exciting when I took over from my father, it was more enjoyable to pass the torch to Ian. The industry is so much more diverse and complicated than it was in the 1970s and 1980s. It has been fun to watch Ian guide the company in new directions as we position ourselves for future growth.”

Ian McElroy adds: “We will continue to look for opportunities that meet our core business model while providing additional value to our customers and employees. Although McElroy Metal is a national company today, we want to remain true to the values my grandfather first cultivated back in 1963.”