Measuring energy use in a building seems like a straightforward notion. Energy enters a building through the electric meter and the utility company sends a bill at the end of each month for how much energy occupants use. But what if we want to learn how each of the individual building systems use energy to identify areas in which we can further conserve electricity? To gain that insight we need to look at submetering our electrical system. Building owners often shy away from implementing submetering projects in their buildings because they don’t fully understand the benefits. However, they could be missing out on the key to discovering how to reduce energy operational costs.

What Is a Submeter? 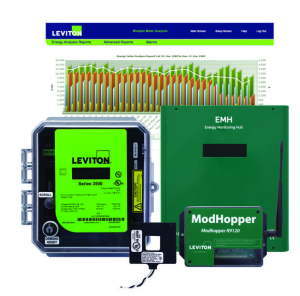 Submeters are typically divided into three different platforms. The fi rst type of meter is strictly an energy meter that measures kilowatt-hours and demand. These are the simplest type of meters to install and use. The second type of meter is an advanced meter that not only measures kilowatt-hours and demand but also measures volts, amps, watts and power factor. These types of meters would be used in larger facilities that utilize many electrical motors. The third type of meter is a power quality meter that measures harmonics in addition to what the other meters measure. Harmonics are non-linear electric loads that cause motors to run inefficiently or overheat. Typically, industrial buildings have the most issues with harmonics.

“The first place someone should consider submetering electrical use is in a multi-tenant building,” says Troy Hull, director of Meter Solution Sales for Melville, N.Y.-based Leviton, a manufacturer of electrical submetering equipment. “Implementing metering helps a building owner to mitigate risk by being able to measure individual energy use, which keeps tenants accountable and reduces overall operational costs.” However, a multi-tenant building isn’t the only ideal candidate for submetering. Single-tenant building owners can also benefit from submetering because a submeter becomes an energy-management vehicle.

Beyond peak-load shedding, another benefit is the ability to identify a building’s energy use to individual components, such as lighting, process loads (the electrical demand for manufacturing or operations) and plug loads (the items we plug into electrical sockets). “Analyzing how a building uses energy down to each circuit allows you to identify where the biggest bang for your buck is in energy investment,” Hull notes. For instance, a building owner who installs electrical submetering may quickly discover a significant amount of energy is being used for lighting after normal business hours. In such a situation, a quick investigation and changes can reduce lighting energy consumption by as much as 20 percent.

One of the big problems in the past has been readability of the data generated by the systems. Collecting large amounts of data doesn’t do much good for a facility manager if it is complex to read and analyze or requires the repeated use of expensive specialty consultants. Today’s systems make the data much more readable by non-energy professionals through the use of online dashboards with easy-to-use and -understand graphic interfaces.

Designing and implementing an energy-metering project is straightforward in a new-construction situation and retrofitting existing buildings is becoming increasingly easier. Devices that utilize wireless technology or integrate into common computer networking infrastructure is becoming increasingly common. Hull adds: “Wireless data is fairly secure from people trying to be malicious. Most platforms are using the same level of encryption that banks use. There are far easier ways to break into a company’s computer system than through submeters.”

The trend these days is toward multi-endpoint platforms that allow one piece of equipment to monitor multiple circuits. “The single biggest challenge in creating a cost-effective metering project in existing buildings is working with the constraints of the building’s electrical infrastructure,” Hull notes. “We often see saturations where there is shared circuitry between different building systems, shared electrical panels and other distribution issues.” Depending on the specific situation, some electrical rework may be required if the goal is to isolate specific circuits. However, implementing multi-endpoint equipment may allow users to monitor multiple circuits without major infrastructure upgrades.