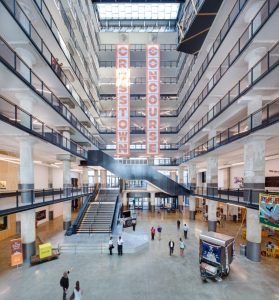 For all the challenges of rehabbing a 90-year-old building that sat empty for two decades, Richardson believes the biggest challenge was believability.

“It wasn’t like a conventional demo and construction project,” Grinder says. “You weren’t tearing out miles and miles of sheetrock. There weren’t very many walls to knock down because the majority of the space at Sears was rows and rows of shelves. It was peeling and sandblasting paint and then this nice robust, concrete structure. The building is solid concrete designed to hold 250 pounds per square foot. Most buildings hold 150. We knew converting it from an empty shell to a fully heated and air-conditioned space was going to be the challenge: getting the miles of pipes in and taking out a massive amount of concrete to make these atria.”

A major obstacle was determining what to do with the approximately 3,200 windows. “They were all original steel, single-pane windows, which the National Park Service wants you to save, rehab and reuse because the building’s on the National Register,” Grinder adds. “But we were trying to get LEED credits and get modern energy savings, so that was a big challenge.”

The team ultimately found the windows were “so damaged that if we tried to remove and rehab them—including the asbestos in the glazing putties—they would have disintegrated.” Once the decision was made to replace the windows, the project team produced five different mockups to ensure the profiles were exactly the same shape and depth. It took an entire year for the new windows to be installed.

A Place to Come Together

These highly efficient windows are part of an overall commitment to sustainability that has seen Crosstown Concourse become the largest adaptive reuse project in the nation to earn a top-level Platinum LEED rating from the U.S. Green Building Council, Washington, D.C. The project scored points for the removal of 54 million pounds of concrete and 10 million pounds of metal, as well as for installing a highly efficient central heating and cooling system.

Now complete after its $200 million rehab, Crosstown Concourse is a kind of neighborhood unto itself. With a goal of combining arts, education and health care, retail stores and restaurants on the first floor give way to a fitness center, a school, arts spaces and offices on the second through six floors. On the seventh through 10th floors are 270 apartments. “If you’re looking at the bottom line, there’s a reason residential is normally in one area [of a project], retail in another and commercial in another,” Richardson says. “It’s difficult to have different people coming for different reasons.” 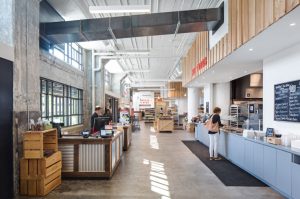 A key component in that coming together is the atriums, which Crosstown Concourse has endeavored to program with a variety of performances and events. “If you think about our tenants, from health care to education to arts and everything in between, these are wonderful local organizations that everybody has lots of respect for. Wouldn’t it be a shame if they all came and just co-located? We knew left to their own devices that would happen,” Richardson explains. “We created these atria and light wells and plazas as places that can be programmed in a meaningful way.”

Though Crosstown Concourse has been open less than a year, Richardson believes he is starting to see that desired mingling. “Over the holidays, you could tell Memphis residents were showing people from out of town around Concourse,” he says. “For this building to even play some small part to help and enhance civic pride has been wonderful. But at the same time, it’s new, it’s an experiment. Success for us is not opening day but 10 years from now. Six months in, so far so good, but we’ve still got a lot of work to do.”