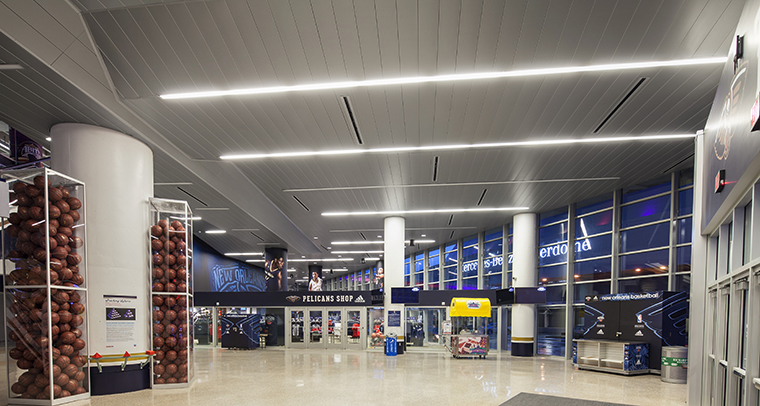 After hosting thousands of concerts and sporting events, not to mention a handful of natural disasters, an iconic multi-use venue in the heart of one of the nation’s most visited tourist destinations was ready for reimagination. Following the purchase of New Orleans’s NBA franchise and renaming them the Pelicans, Tom Benson needed a venue worthy of his “new” team. Enter New Orleans-based architecture firm Eskew+Dumez+Ripple. The architects devised a plan to refurbish the interior and exterior of the Smoothie King Center. Beginning in 2013, the design team embarked on a multi-phase project, tackling several renovations directed at improving the guest experience.

The arena, which opened originally in 1994, had seen few improvements over the years. Beginning in 2013, the design team embarked on a multi-phase project, tackling several renovations directed at improving the guest experience. Among the major changes were complete overhauls of all suites and club lounges, a lobby transformation, new box office areas, the addition of loge boxes, and a reimagined concessions area. Changes were also made to the sporting area, including new surfaces and entertainment boards.

One of the first acts of business was in the arena’s lobby area. The architects realized that, because the original design did not feature an atrial foyer, fans simply entered the building and proceeded to the nearby escalators and to their seats. By rethinking the layout of the concession area and team store, the architects worked to spread the crowd and enhance the venue’s entertainment value.

To create the new central lobby space, architects enclosed the space underneath existing pedestrian bridges, and created a new entrance, box office and team store. The ceilings portion of the project called for a product that would not only enhance the over aesthetic of the space, but was accessible, affordable and had a good finish. Hunter Douglas’s 300C Linear Plank metal ceilings were installed in the lobby area, adding to the topographical image of the area. By rethinking the layout of the concession area and team store, the architects worked to spread the crowd and enhance the venue’s entertainment value.

As part of efforts to manage budgetary concerns, architects elected to custom fabricate stock panels as they went. Early and clear collaboration between the manufacturer and architects made it easy to transition the ceiling from computer model to reality, expediting installation and minimizing associated costs. The long span design of the ceilings made it easy for installers to create a clean, orderly and finished look. The 300C Linear Plank metal ceilings’ concealed suspension system from Hunter Douglas also contributed to its clean, monolithic appearance.

The final phase of renovation realized a number of exterior changes to modernize the facility. The building’s facade received a new color scheme, and updated LED lighting and a new LED promotional display were added. The renovated arena was unveiled to fans only months after the team’s rebranding was finalized. The owners had their rebranded team, and the facility had a refreshed look.