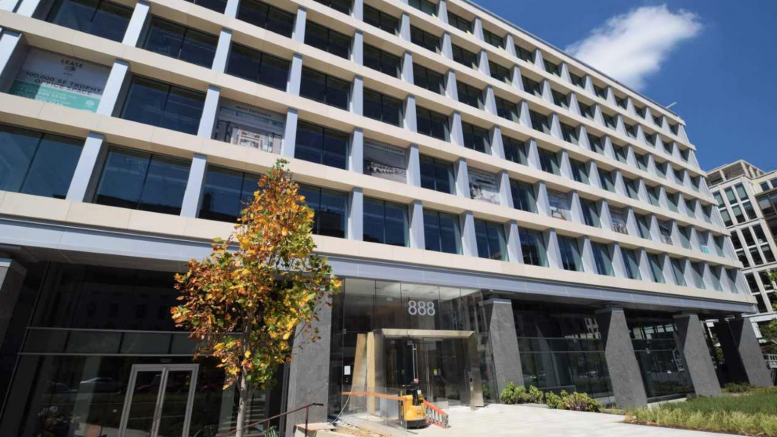 Posted By: Retrofit Magazine Editor May 3, 2021

The renovation of the historic building at 888 16th St. NW in the nation’s capital included a complete transformation of the facade, down to the precast structural members. The new facade is comprised of Portuguese limestone, granite, curtainwall and larson by Alucoil metal composite panels.

Renamed the Jack Valenti Building in 2005, the existing facility was transformed into a 180,000-square-foot “trophy-class” office building. Nine of the 12 stories are above grade. Robert Blabolil, senior associate and designer with Gensler D.C., cited a number of reasons larson panels were chosen for the facade.

“Metal composite material was selected for its durability, system depth and natural color selection,” Blabolil says. “There was limited depth in which the design team had to fit within when recladding the existing structure. The use of the metal composite material ensured the team was able to maintain an optimized system profile depth that was relative to that of the historic building facade.”

Brawner Builders coordinated the delivery and handled the installation of the larson MCM from Alucoil, as well as the stone, curtainwall and glass for the facade. Brawner Builders Senior Project Manager Eric McShane says there was a lot of prep work before facade materials were ordered.

“It’s a challenge dealing with existing slab and existing columns on a building erected in the ’60s,” McShane says. “We did a three-dimensional scan of the building to create a drawing of the building and then ordered everything to fit to that drawing. We worked closely with East Coast Metal Systems to coordinate the project and they did a great job of fabricating the panels.”

Steve Kerr, director of Operations at East Coast Metal Systems of Triadelphia, W.Va., believes that this project was a great example of teamwork and collaboration. “Our customer, Brawner Builders, supplied us with a good set of field dimensions and from there, we were able to seamlessly fabricate the panels and meet the desired schedule,” he says. “As a Premium MCM Fabricator, we utilized our experience and state-of-the-art technology to fabricate the desired profiles for the project. We appreciate projects with this type of cooperation and leadership.”

“The facade was designed to emphasize the horizontal structure by recladding the horizontal supports with limestone,” Blabolil says. “Metal composite panels framed the overall elevation and vertical supports. Set back from the face of stone, its jointless spans created a clean transition from floor to floor, enhancing the overall composition of the building.”

Blabolil says the use of metal composite material allowed the design team to minimize joints and maximize vertical spans, creating clean transitions between window bays and maximizing daylighting into the interior space. “The system allowed for maximization of window area, giving tenants the opportunity for floor to ceiling glazing through the entire floorplate,” he says.