For decades, the phenomenal growth rate of Phoenix seemed to provide little time for evolution. From 1980 to 2000, the city’s population nearly doubled. It has expanded another 25 percent since then. Yet traces of the past have informed the present and future of Phoenix since the city’s founder, Jack Swilling, stopped to rest at the foot of the White Tank mountains in 1867 and observed the ancient ruins of canals constructed by the Hohokam people. Inspired by the possibility of returning the river valley to arable land, Swilling had a series of canals built that followed the channels of the abandoned Native American system. Today a monumental system of dams and canals controls the flow of water throughout the 500-square-mile Phoenix metropolitan area.

Other examples abound. In 1891, streetcar lines were laid over former stage-coach routes. In 1947, the existing street grid facilitated the city’s decision to transition from streetcar service to bus transit. In 2008, the first leg of the new light rail system replaced the most popular, highly utilized bus line.

It comes as no surprise, then, that developers and architects have begun to realize new value can be derived from the abundance of mid-century modern buildings that sprung up in Phoenix during the post World War II boom. Phoenix-based Nieto Development’s conversion of a 7,000-square-foot, 2-story office structure built on the edge of downtown in 1957 into a multi-tenant commercial facility called “The Link” illustrates this trend well. Nieto Development purchased this building in December 2007. Improvements and alterations were completed by July 2008.

Chris Nieto, who co-owns Nieto Development with his wife Becky, said they decided to retrofit rather than build new for practical and philosophical reasons. “In this market, it makes less sense to build ground up because buildings can be had for well below their replacement values,” Nieto explains. “We wanted to maintain a high level 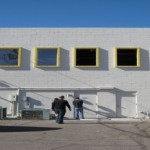 of quality while keeping debt service low. We figured as long as we could offer a superior environment for at or below market rates, we would be able to select the best possible tenants and ensure quick stabilization of the asset.”

The building’s location also was a plus. Its proximity to major bus routes and a light-rail station meant there was no need to add parking spaces because tenants and visitors easily could use mass transit.