Equally important was the building’s aesthetic potential. In 2003, Nieto and colleague Joe Herzog, AIA, co-founded the award-winning design firm, [merz] project, with the stated intent of using high-quality architecture to connect small-scale activity nodes in areas primed for revitalization. In fact, the building’s new name expresses this goal. The Link is the sixth infill project the firm has completed in downtown Phoenix, which is expected to benefit from $4 billion in public and private investment between 2006-11.

“We always saw [this project] as an infill opportunity that would connect some of the dots in the downtown area,” Nieto said. “As the city is further developed over time [this building] will become one of many [more] links.” In this instance, Nieto and Herzog voted with their feet and their dollars. They built on the Nietos’ financial investment by deciding to relocate [merz]project’s studio to the top floor of The Link. [Merz]project also served as architectural designer and construction manager for the retrofit.

Extending the Aesthetic of Austerity

The simple forms and finishes of the existing building influenced the architects’ minimalist approach. “We wanted to demonstrate the clarity of the built form,” Herzog said. “The original building was modern because it was straightforward and built with pragmatic materials. Within that pragmatic envelope, we strategically intervened, added, cut into, wrapped and created new spaces.” 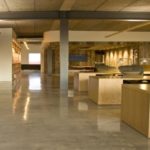 [Merz] project’s design preserves the existing shell and a stairway while stripping the interiors down to their primary surfaces. It leaves the concrete floors and ceilings exposed, though these are sealed so they require little maintenance.

The HVAC, plumbing, electrical and lighting systems were completely replaced with new, resource-efficient systems that are zoned to relate utility costs to the use rates of each tenant. It is expected to provide 50 percent of the building’s power during peak months and meet 100 percent of the building’s off-peak demand. Calculations indicate this will result in $600 per month savings in electrical costs.

The most visible changes include reconfiguring the west façade to provide three street-level entries where one previously existed; replacing all single-paned, fixed-in-place windows with operable units that feature high efficiency, low-E glazing; and recessing the floor-to-ceiling-height glass openings to create a second-floor balcony and provide shade during the hottest hours of the day. The new fenestration also enables the spaces to be naturally ventilated during cool periods and introduces daylight deep into interiors, reducing the need for artificial lighting.

While [merz]project’s commitment to lease the entire second level gave the Nietos the confidence needed to purchase and begin retrofitting this building, not knowing what type of businesses would ultimately lease the first floor presented some planning and design challenges.

“We literally didn’t know how the building as a whole was going to work,” Nieto said. [Merz]project moved into its new studio within the building during August 2008. The remaining spaces were marketed as clean, gray shells then finished as the owners of a café, a nonprofit organization and an art gallery signed leases.

While Nieto said he would have preferred to complete construction on both levels simultaneously, he is happy to have completed a successful speculative project during a major recession. Full occupancy was achieved by February 2009.

With the retrofit happily behind them, the Nietos are enjoying the new life they’ve brought to an aging building. “We host a lot of events here,” Nieto said. “I like to stand in front of the building and watch people move through the multiple and very different environments within.”

Herzog is pleased with the results as well. “I think we have achieved a nice balance and celebrated the beautiful integrity of the original structure,” he said.

ASHRAE and IES Revise Standard for Energy Efficiency of Retrofits