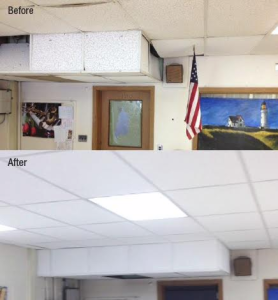 The contest, sponsored by Armstrong Ceiling & Wall Systems, offered building owners and facility managers an opportunity to win a grand prize of 1,000 square feet of Ultima ceiling panels by submitting a photo of a stained, dirty or damaged ceiling in their facility.

O’Neil submitted a photo of a sagging ceiling that was coming apart above a classroom at Lisha Kill Middle School in Albany. After determining that the damaged middle school ceiling was the “ugliest” ceiling entered in the contest, a panel of Armstrong ceiling experts awarded 1,000 square feet of Ultima ceiling panels to O’Neil. The new panels were used to replace the damaged ceiling in the middle school classroom.

Winning the contest enabled O’Neil to replace the ailing ceiling without dipping into his tight maintenance budget. “We try to replace as many of these old ceiling panels as we can, but we’re on a tight budget,” he explains. “That’s why I entered the contest—to see if I could win some new ceiling panels.”

The facilities director received many compliments from school officials after the Ultima ceiling was installed. “The new ceiling came out great,” says O’Neil, who was able to quickly replace the old ceiling panels using the existing grid. “It looks beautiful. It made a huge difference in the way that room looks. It’s like night and day.”

In addition to their smooth, clean visual, Ultima ceiling panels feature new Total Acoustics performance, which is the ability to provide sound absorption and sound blocking in the same panel. To deliver that performance, the panels have a Noise Reduction Coefficient (NRC) of 0.70, meaning they absorb 70 percent of the sound that strikes them, and a Ceiling Attenuation Class (CAC) of 35, meaning they help block sound from intruding into adjacent spaces. Ceilings with Total Acoustics performance provide the design flexibility needed to adapt spaces to new uses while maintaining the acoustical requirements for each type of space. For more information about Total Acoustics ceiling panels, visit the Armstrong website.