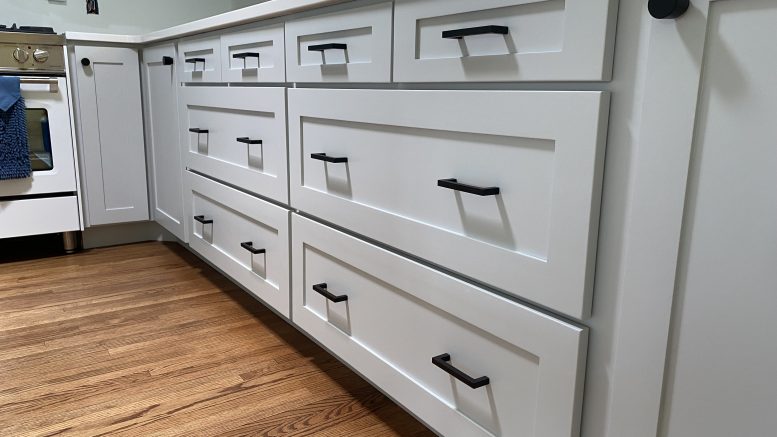 Most of my decisions for our kitchen remodel were fairly straightforward but there were three things I agonized over: pendant lamps over the island (I eventually purchased the very first ones that caught my eye even though I spent months looking at pendants), my backsplash (more about this decision in the near future), and the knobs and pulls that would complete my cabinets.

When it came to knobs and pulls, I really wanted something that would “pop” on my light gray custom cabinets. (Read more about my cabinetry in “Part 12: Custom Cabinetry by a Carpenter Who Cares.”) In my mind, the knobs and pulls are like the jewelry of the kitchen, the perfect accent to dress up—or down—the other choices in your wardrobe. I scoured Pinterest and Instagram, looking at interior designers’ hardware choices for their clients and what they installed in their own homes. Like many of the decisions for my kitchen, I really had no idea what I was looking for; I would just know when I found it.

In December 2020, I spotted a kitchen on Pinterest with light gray cabinets and matte black knobs and pulls. The kitchen also had a brushed nickel faucet, which is what I would eventually have installed, as well. I needed to see these mixed metals in one image to know it was right. I sent a screenshot of the kitchen to my friend Amanda, who has been my sounding board throughout this renovation process. We have similar design styles and she gets as excited as I do when I find something extraordinary. Amanda said she thought the matte black knobs and pulls would look sharp and gave me her blessing.

I was able to ascertain that the pulls in the photo that inspired me were Atlas Homewares’ It Pull in matte black. (I mean if the name “It Pull” didn’t tell me these were “it”, I don’t know what would!) Before I made my final decision, I, of course, spent some more time searching the web, specifically for the It Pull. Each time I spotted It in another design, I fell more in love with its modern, hard lines. I felt like the It Pull would create the right balance for my kitchen, which has more traditional cabinets but a modern range and faucet. Plus, I had at this point already made the decision for my backsplash and knew it would have black in it. I thought the black in the backsplash would make the black knobs and pulls even more dramatic.

I was beyond confident that the It Pull was the one for my kitchen but I realized I also wanted knobs and there is not an It Knob in Atlas Homewares’ collection. I wasn’t sure which knobs would pair well with the It Pull. Fortunately, working for retrofit, I was able to reach out to my connections in the industry and determine what Atlas Homewares’ knobs most designers pair with the It Pull. The suggestions I received were Tom Tom, Browning, Conga and Lennox. Tom Tom and Conga immediately spoke to me. Something about the roundness and “weight” of the Tom Tom and Conga felt like the right balance to pair with the slim, hard lines of the It Pull. (I obviously have no formal design training so I hope I am not making you shake your head right now!) It was a difficult decision choosing between Tom Tom and Conga but I eventually decided on Tom Tom.

As my cabinetry was being installed, I ordered the It Pull and Tom Tom Knob for my kitchen cabinets. Ted, who built my cabinets, installed the knobs and pulls for me and, as they went on, I was absolutely certain I had made the right choices.

The knobs and pulls are perfection. Not too big, not too small, and just bold enough to catch your eye and make you think “those knobs and pulls are the absolute best choice for this kitchen!” At least that’s what I think. I cannot imagine choosing anything else now that they’re installed and we’re in the last stages of kitchen remodeling.

I would be remiss if I didn’t mention that the It Pull is quite strong. My 3-year-old daughter Clare uses them to climb onto the perimeter countertop so she can look out the window. I doubt they’re marketed for this particular use, but their strength is certainly a bonus in a real, everyday kitchen with an active toddler.

Read the previous posts in my home remodeling series:

Be the first to comment on "My Home Remodel, Part 13: All Hail the Cabinet Hardware"