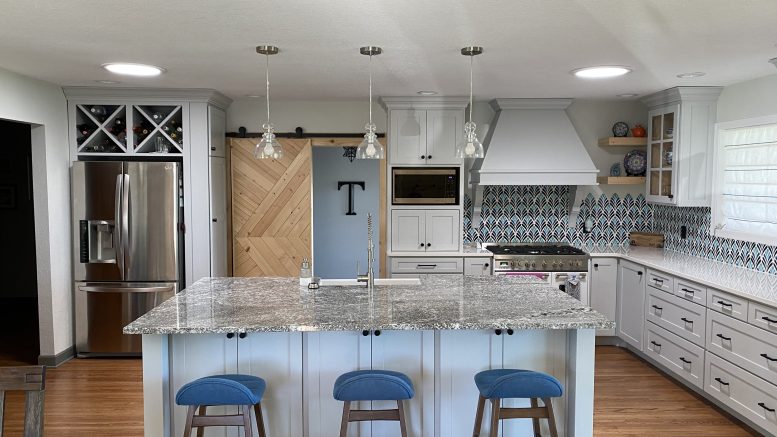 In Part 7 of my blog series about my kitchen remodel, “Let There Be Light”, I explained how gloomy our home’s existing kitchen had been. Even with the minimal amount of electric lighting in the kitchen, the dark floor, cabinetry and countertops made everything feel dreary and claustrophobic. (Just recalling what it looked like makes me sad! See the “before” photos in Part 7.)

In addition to picking light and bright finishes for our new kitchen, I integrated as much natural and electric lighting as I thought was possible. When it came to natural lighting, our north-facing kitchen needed all the help it could get. I had a new, 4- by 3-foot stationary window and folding glass wall installed on our north wall, overlooking the lake on which we live, but I also wanted to include a skylight or a tubular daylighting device, so I could bring even more daylight into our kitchen.

I asked the contractor who did all the structural work on our kitchen, Kevin Schmidt, owner of Kevin Schmidt Construction, what he recommended and he said Solatube. In his words, not only are they easy to install but they don’t leak like skylights can because, in his experience, too many skylights are not flashed properly. I was familiar with Solatube at the time of my kitchen remodel, and I was eager to install one of my very own.

My husband Bart had never heard of Solatube but, fortunately, he trusts me when it comes to the design of our home. The morning after our Solatube was installed in our kitchen, Bart got up first to let our dog outside. Bart thought we had left a light on in the kitchen overnight but soon realized it was the Solatube, bringing in more natural light than our window and folding glass wall in the early hours of the morning. Bart was impressed—so impressed that he was interested in another Solatube for inside our garage.

The stairway that connects our garage to the main floor of our house has always been dark, even with an electric light above the stairs. Having experienced the amount of light a Solatube can bring into a space, Bart was sure a Solatube would be the best solution for lighting the stairway in the garage. He was right. Now that we have a Solatube installed in the garage stairway, I catch myself flipping the light on when leaving the garage because my brain thinks the light already is on and needs to be turned off.

The bonus of this garage stairway installation is that we installed the exact same Solatube model as in our kitchen; however, at night we can turn on the light over the garage stairway—just as we always had—because our contractor installed the Universal Light Add On Kit with our Solatube. Conveniently, the Solatube is located in the exact same place as the previous light. It’s a daylighting device by day and a light at night! This worked out wonderfully because of the small ceiling space above the stairway; having both a light fixture and daylighting device up there would’ve looked crowded and, well, terrible.

I also learned natural daylight is addictive! I loved the one Solatube in our kitchen so much that I started thinking the only thing better than one Solatube would be two. Another Solatube on the other side of the island would not only bring much more daylight into our kitchen, but also would create balance. Our contractor, Kevin, had to cut into a rafter to install a second Solatube directly across from the first but, he said, it wasn’t a big deal for him to do this and add the necessary support. Kevin and his assistant, Mason, installed the second kitchen Solatube and the garage Solatube in less than one full workday.

Bart wasn’t home the day the new Solatubes were installed, so I texted him photos of the new installations, along with this comment: “It’s amazing how much light there is in the garage stairway and on the other side of the kitchen now. We didn’t know what we were missing!”

Bart is a banker, who is always thinking about numbers and budgets. His response was, “Gotta love free light.”

Read the previous posts in my home remodeling series:

AAMA to Hold Webinar on Daylighting Strategies and Methods

Be the first to comment on "My Home Remodel, Part 17: ‘Gotta Love Free Light’"