How was the Hoffman Building, an anonymous and neglected early 20th century industrial structure, transformed into a landmark gateway building, which now is an identifiable image for a national footwear corporation and a public entertainment venue? A little bit of luck and the combined vision of planners, stakeholders and enlightened commercial interests. 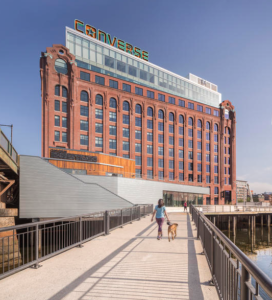 Boston representatives permitted Converse to incorporate its name on a major rooftop illuminated fixture. The sign along with the building’s glass addition has become an important landmark as people approach the city from north of Boston.

Facing an industrial backwater of Boston harbor and sandwiched between two rusting truss bridges, the Hoffman Building, a combination of two abutting industrial brick structures, had long been neglected. The early 20th century wharf building was separated from the Charles River locks by an aging wood wharf whose use for Boston Garden event parking was limited by the risk of cars plunging through rotted planks into the industrial lagoon below. The lagoon itself, the body of water between the Charlestown Bridge and Charles River locks, was an amenity only to the occasional fisherman who would lean over the bridge railings and cast to the striped bass that fed when the locks opened and roiled the brackish water.

The Hoffman Building had been poorly treated over the years. The more prominent of the two constituent structures, 160 Washington Street, was originally built in 1906 by W.F. Schrafft & Sons Confectionery and later acquired as a manufacturing facility by Raytheon’s Submarine Signal Division in 1940 for the manufacture of submarine components. It changed hands again and underwent a series of haphazard commercial renovations, including a peculiar 2-story addition that obscured some of the remarkably rich brick detailing of the original structure.

From the early 1980s on, various real-estate concerns considered the redevelopment of the Hoffman Building, which together with its pier was known as Lovejoy Wharf. Alas, none could make it work and the property remained partially vacant through several business cycles. A recurring obstacle to the redevelopment of the site was the perceived problem of parking.

Aside from the increasingly perilous use of the deteriorating pier as a parking deck, incorporating parking within the unfavorably tight column grids of the existing building was infeasible. Yet, for a long time, parking was considered essential to any proposal, especially those that included a residential component.

“It really wasn’t possible to make parking work within the existing structural grid,” says Tom Schultz, project manager for The Architectural Team Inc., Chelsea, Mass., master planning firm for Lovejoy Wharf and architect for the Hoffman Building redevelopment. “The interior space was visually deceptive. Walking around inside it looked sufficient, and we had developers who had a hard time grasping the difficulty of making turns, but in the end they had to accept what was not obvious on initial visual inspection.”

Nonetheless, changes in the surrounding environment made the site ever more attractive. Starting with the completion of Boston’s Big Dig and the replacement of the Charlestown High Bridge by the celebrated Leonard Zakim Bridge, Lovejoy Wharf, previously hidden, had become extremely visible.

“The double-decker truss bridge really concealed the site, but when it came down it was as though a veil had been dropped,” says Jay Szymanski, who led the design effort at The Architectural Team. “With 200,000 cars a day passing on their way into the city, the site was suddenly subject to tremendous visual pressure.”

The redevelopment of the site would also enable the continuation of a longstanding city planning goal of creating a continuous public “Harborwalk” along the water’s edge. Intended to stretch continuously along Boston’s waterfront, reconstruction of the wharf as a public space would permit linkage between Boston’s North End and, ultimately, the Esplanade, Boston’s popular green parkland running beside the Charles River. 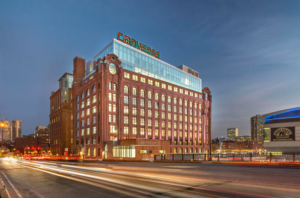 Related Beal Co. took the forward-thinking (for Boston) position that the provision of parking was not a necessity in an urban environment with proximity to multiple modes of public transportation.

“The resurrection of the wharf; its elevation from a car repository of last resort to a programmable pedestrian connection and waterfront amenity space; its connection to the lost spur of Harborwalk, which was dormant under the North Washington Street Bridge; and the reintroduction of a water shuttle dock were all positive points,” says David Carlson, deputy director of Urban Design at the Boston Redevelopment Authority. “The introduction of spaces and tenancies, which support animation and active public life, along this newly reclaimed active edge, were a constant element in building development discussions.”

While the Harborwalk was celebrated as an important pedestrian circulation route connecting all points along the water’s edge, the key to its success lay in providing significant and varied public spaces and events along the way. Early on, city and state planners identified the potential of the wharf as a destination in its own right if combined with the right mix of public and private uses and encouraged the development to rise to that challenge.

That meant the planning and permitting of Lovejoy Wharf must incorporate the notion that the wharf adjacent to it be reconstructed as a 1-acre deck not only to provide continuity of public access along the water’s edge, but also as a combination public plaza, landscaped greenspace and commercial apron for liner retail uses at the deck level of the abutting Hoffman Building. The challenge of designing a plaza flexible enough to accommodate such a range of uses fell to Boston-based Copley Wolff Design Group, landscape architects for the project.