Total project payback will be achieved in less than five years for MetLife's new LED-lit parking lots and in a little more than two years in St. Louis.

MetLife Inc. recently took out an energy savings policy with GE Lighting—upgrading to Evolve LED outdoor lighting in parking lots at 10 office locations and switching to more energy-efficient T8 fluorescent indoor lighting at its 650,000-square-foot administrative center in St. Louis. Combined, these lighting solutions will save MetLife approximately $360,000 a year while consuming about 3.5 million fewer kilowatt hours (kWh) of electricity. 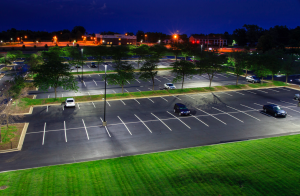 MetLife is a global provider of insurance, annuities and employee benefit programs serving 90 million customers. Thanks to GE’s Evolve LED Area Lights, the company will now use nearly 1.1 million fewer kWh to illuminate its parking lots—equaling a $164,000 utility cost savings per year (based on a $.15 kWh rate and 4,380 hours of operation). The switch from T12 to T8 linear fluorescent indoor lighting (LFL) at its St. Louis office, meanwhile, offers MetLife an additional 2.4 million kWh savings, or $196,000 annually (based on an $.08 kWh rate and 5,600 hours of operation).

After learning of the advantages of LED outdoor lighting, John Chambers, assistant V.P. of facility services and sustainability for MetLife, met with GE Lighting to explore the possibilities. “When we first talked about the lighting, GE had just come out with a new LED outdoor fixture,” recalls Chambers. “We were introduced to GE’s lighting technology team and decided to have them perform a test for us. We installed several fixtures at one of our Pennsylvania properties and were very impressed with the improved visibility in the lot. That’s when we made a multi-site upgrade part of our critical plan for the coming year.” 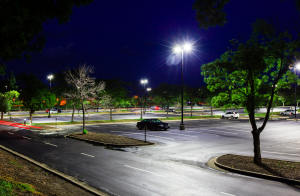 The lots comprise 700 parking spaces and 100 fixtures on average.

“It was a seamless, easy transition from the old lights to the new LEDs,” says Richard DeRick, portfolio manager for Cushman & Wakefield, a global real estate solutions provider managing 7.3 million square feet of owned and occupied space for MetLife. “The electricians had no problem with the footprint of the base going on the existing poles. And the aesthetics were amazing—we saw one lot that was half complete and the difference from one side to the other was incredible. There were no dark spots where GE’s area lights had gone in.”

As it so happened, the timing of the installations couldn’t have been better, as DeRick explains. “The completion of several properties actually fell in line with Daylight Savings Time,” he notes. “We heard numerous positive comments that next day. As one associate told me, ‘The new lights look great! Perfect timing especially now that the days are getting shorter.’ Another remarked, ‘The difference in visibility between the old and new ones is really noticeable—like day and night!'”

“It gave us great peace-of-mind to know our employees had that added security when arriving at work and heading home at night,” Chambers adds. 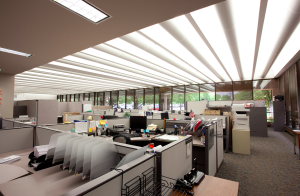 Combined, the more than 1,000 Evolve LED Area Lights will reduce MetLife’s electricity use approximately 1.1 million kWh a year, totaling a $164,000 savings. MetLife also anticipates much less maintenance for many years to come. Previously, up to 25 percent of the old HID lamps had to be changed each year, incurring tens of thousands of dollars in cost. GE’s Evolve LED Area Lights are expected to outlast the old lights significantly.

Pleased with the progress of its LED parking lot lighting project, MetLife went in search of additional energy savings, turning its attention to new fluorescent office lighting at its 650,000-square-foot administrative facility in St. Louis. More than 7,000 old T12 fixtures consuming nearly 5.1 million kWh a year dominated ceilings in the 2-story building, home to 950 MetLife associates. GE Lighting experts performed a walkthrough and recommended a simplified design—lamps of many types, sizes and colors would be changed to a single lamp type using one of two ballast types.

GE’s complete office lighting solution created an average 58-watt savings per fixture when accounting for all 7,528 fixtures at the facility. This saves about 2.4 million kWh of electricity a year, a $196,000 utility cost reduction. MetLife expects to invest these savings back into the system, possibly adding photo cells, motion sensors and control options to optimize efficiency.

Chambers noted total project payback will be achieved in less than five years for MetLife’s new LED-lit parking lots and in a little more than two years in St. Louis. Combined savings as the result of more energy-efficient GE lighting solutions total nearly 3.5 million kWh and $360,000 in electricity costs a year. 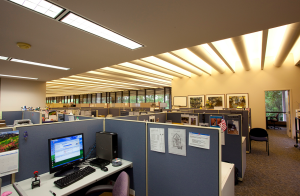 Total project payback will be achieved in less than five years for MetLife’s new LED-lit parking lots and in a little more than two years in St. Louis.

“We think we’re on the cutting edge of this technology and among the first Fortune 500 companies to commit to LED lighting in its lots,” he said. “MetLife has taken big steps to meet its environmental goals this past year with help from GE and its lighting solutions.”

MetLife’s comprehensive lighting update will further remove nearly 2,000 metric tons of carbon dioxide (CO2) from the atmosphere annually—equivalent to eliminating the CO2 emissions of approximately 400 passenger cars or to planting 570 acres of trees.