Because the building was on the national historic register, the exterior had to remain unchanged, and this created a conundrum where ventilation was concerned. “In a restaurant, you have hundreds of little bits of equipment from the range hoods to cooking components, and the team had to figure out a way to exhaust the complete system. The only existing exhaust possibility was a chimney in the opposite area of where the kitchen needed to go,” Toral says. 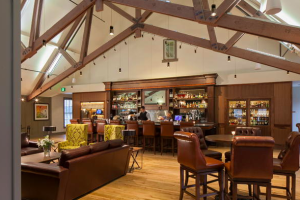 The architect located a rare 1885 photo that showed a small chimney originally rose on the back side of the building. Although the chimney hadn’t been in place for 100 years, the historic review board allowed the team to build a historically accurate chimney in that spot and use it for exhaust. On the second-story interior, a large surround at the fireplace and bar area hides the exhaust equipment for all of the kitchen and HVAC systems. Without the historic photo and innovative solution to exhaust, the space would have never been able to house a restaurant.

Another clever concept was born from limited surrounding exterior land. A restaurant requires carbonic systems for drinks, as well as HVAC compressors and motors. Now atop a garage, Raven & Rose leased two underground parking spaces below the restaurant for the equipment and ran lines through the floor directly to the equipment.

As the team installed extremely efficient HVAC controls, GBS’ engineers came in to measure temperature, air speed and humidity in multiple areas to ensure the varying spaces would maintain thermal comfort for chefs, guests and employees. GBS also provided commissioning to verify that the energy-related systems were installed, calibrated and performing according to the owner’s project requirements, basis of design and construction documents. The sustainable consulting firm also provided guidance on the restaurant’s purchase of 50 percent green power.

The Art of Salvage

The building’s original brick chimney spanned 3 stories but it was seismically unstable. During the restoration, the chimney was carefully deconstructed and all the 1883 bricks were saved. Mygrant had them reused as a wall that now frames the restaurant’s wood-fired oven.

Windows offer a view of the building through time. On the ground floor, new, energy-efficient windows dominate, but of 65 total windows, 25 of the carriage house’s 1883 windows remain. In the upstairs bar, the team kept windows that were added to the north elevation after the building’s fire because they so closely resembled the originals. New windows installed during the restoration match those from 1883. Three original doors were retained and two new ones were added: Raven & Rose’s new front door and the carriage doors reflect the style of the 1883 doors. 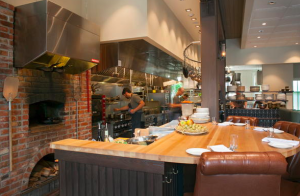 The building’s original brick chimney was seismically unstable. After being carefully deconstructed, the circa-1883 bricks were reused as a wall that now frames the restaurant’s wood-fired oven.

Post-consumer, salvaged and reused products show patrons how these products elegantly translate into new uses and visually convey the Ladd Carriage House’s history. The majority of furniture and fixtures are Forest Stewardship Council-certified
sustainably harvested wood, and several manufacturers were required to purchase FSC-certified wood to supply the restaurant. Former walnut crates once used to ship large cargo form the tables. The two bars in the space were custom made from FSC-certified wood to exactly fit the space. The bar countertop in the dining room was crafted from recycled zinc. The soaring 35-foot ceiling in The Rookery Bar also prominently displays the hayloft’s original 131-year-old restored wooden trusses.

“We also kept the beadboard ceiling from the front three stories of the building— all we did was paint it,” Toral explains. “And the original flooring remained in place as sub-flooring.” In an unexpected nod to the carriage house’s original purpose, Raven & Rose’s new flooring stems from reclaimed wood first found in Kentucky horse-stable fencing.

Behind the Building Survey Scene: Measuring Robinson Center for the Performing Arts