In the architecture and construction professions, there is only one thrill greater than marveling a completed project: actually moving into the completed project and admiring your vision and craftsmanship down to the finest detail every day. Randall Lanou, LEED AP, MCGP, and Erik Van Mehlman, AIA, CGP, are lucky enough to experience this phenomenon as they work in their retrofitted office building in downtown Durham, N.C. 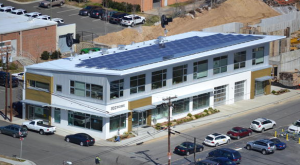 A 32.6-kilowatt solar array consisting of 136 panels has been providing 61
percent of the building’s energy. PHOTO: BuildSense Inc.

The partners, who met while receiving their master’s degrees in architecture at North Carolina State University, Raleigh, operate BuildSense Inc. at 502 Rigsbee Avenue. The firm was established to design and construct well-crafted and resource efficient homes, and the partners soon earned a local reputation as the “green guys”. Therefore, it is not surprising that Lanou and Mehlman retrofitted their own office into not only one of the most energy-efficient buildings in Durham, but also one that is truly representative of BuildSense’s values as a sustainable firm. It’s the type of building that makes Lanou and Mehlman proud to come to work every day.

Built in 1945 as a farm-equipment-maintenance building, 502 Rigsbee had spent its last 30 years as various automotive service centers. The 1-story, 6,000-squarefoot solid masonry building had optimal orientation to achieve Lanou and Mehlman’s daylighting and solar-power goals. Their vision of the renovated building also provided enough space for Clear-Vue Glass, an architectural and decorative glass company, to operate its business. Clear-Vue Glass’ owners had met with BuildSense to renovate their leased space but difficulties posed by that project and shared similar interests led the two businesses to search for a building together. The new combination of owners from Clear-Vue Glass and BuildSense formed ClearSense Properties LLC and purchased 502 Rigsbee.

By adding a second story to the building in which BuildSense and additional tenants (occupied today by a marketing firm and a yoga studio) could operate, Clear-Vue Glass could maintain an office, fabrication facility and showroom at pedestrian level.

Because of the building’s automotive history, remediation was required, including removal of a buried tank that had been illegally used to dump motor oil. To ensure the property’s former use didn’t impact the building’s future occupants, BuildSense specified a vapor-intrusion system that was placed over 4-inch rigid insulation (R-22) on the existing slab. Then, another 6-inch concrete slab was poured on top. “We wanted to ensure the building would be completely clean with a healthy indoor environment,” Lanou states. 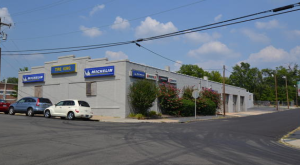 To create the most energy-efficient building possible, Lanou and Mehlman opted to take the existing structure down to its skeleton, leaving only the masonry shell and primary steel columns and girders. Originally, they planned to maintain the existing roof and build the second story on top. However, the roof sloped from north to south about 3 inches for drainage. The partners decided to remove the wood framing, add more steel and a metal deck, and pour a new level composite concrete slab for the second story.

Mehlman recalls: “Doing everything required to make it fire-resistant, soundproof, and give it a finished surface on both the top and underside would have taken a lot of time and cost and would not have resulted in as nice of a finished product. By pouring a concrete floor, we got our fire rating and a level floor that has a finished surface on the top and underside. During renovations, people often say ‘let’s keep everything to keep the costs down’. In this case, it kept costs down by actually getting more aggressive.”

The second floor features framed walls with 5 1/2-inch open-cell spray foam cavity insulation (R-19.8), as well as 1-inch continuous rigid insulation (R-5.5) on the outside over the studs, which helps mitigate thermal-bridging issues. The first floor consists of the original load-bearing brick walls with framed walls built about 1 inch off the interior face of the masonry. Closed-cell spray foam fills the 1-inch space with continuous insulation and the stud wall with 3 1/2 inches of cavity insulation (R-27 total). The spray foam also creates a vapor and air barrier. One-inch rigid insulation was placed at the second- and first-floor slab perimeters to completely remove any thermal bridging opportunities from the overall structure. “Bottom line is we wanted to achieve solid R-values, and we did so with continuous insulation and good air sealing,” Lanou says.