Posted By: Retrofit Magazine Editor May 8, 2017 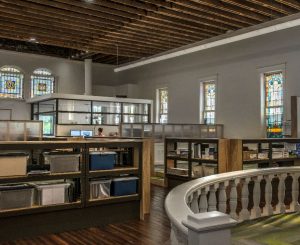 The stained-glass windows are restored and reframed to preserve their utility.

One of the most significant elements Kronberg Wall Architects’ wished to preserve in the former church was the stained-glass windows. The plexiglass that had been installed to protect them had yellowed and considerably obscured their color and beauty. The windows were originally troffer windows but had been nailed shut and their hardware painted over many times. To preserve their utility, the windows were restored and reframed by a professional. The casings were redesigned to allow the lower windows to slide up, providing daylight in the building. The U.S. National Park Service, Washington, D.C., stipulated the profile of the runner could not be visible from the street, so considerable effort was made to achieve this. Finally, new storm glass was fitted to the windows to protect the stained glass and provide extra insulation for the building.

To accentuate the stained-glass windows, the design team chose a predominantly neutral palette of colors and materials. The only other brilliant color in the space is found in the carpet with the colors hand selected to mirror the light streaming through the stained glass. These pops of color in the carpet are used to create paths of interest throughout the space, as well as playful patterns one discovers as one explores the space. Within each work pod, when the light shines through the stained-glass window a certain way, the colors of the glass fall in perfect synchronicity with the color patterning of the carpet.

Formerly the site of Bearden Temple AME Church, which was built in 1922, Kronberg Wall Architects’ new office space is a contributing building to the Historic District of Reynoldstown.

When the building was acquired it was on the verge of demolition because of the perceived difficulties associated with the adaptive reuse of a building with a sloping floor in the sanctuary. To solve this problem, the design team created workspaces that float on top of the historic floor and are constructed to maintain a level top while adjusting to the sloping floor below. The team left the chancel area intact; it is used as a focal point for the design and an area suited to speaking events for the firm. In fact, it was a critical design goal to provide a space that could be shared by the community for lectures, community gatherings and even concerts by local musicians.

Kronberg Wall Architects’ sought to be good stewards of the historic landmark and continue to maintain a building that portrays the rich architectural and cultural legacy organic to the Reynoldstown community. The firm also endeavored to meet LEED criteria. Not only did the project allow Kronberg Wall Architects to exhibit the firm’s design, planning and preservation principles to its clients, it also allowed the team to save a building that was an important piece of its community’s history.

Wood-Look Porcelain Tile Can Be Installed Indoors or Outdoors

Be the first to comment on "Project Profiles: Office Projects"