The inn has saved money in trash collection and associated expenses. “We used to have 35-plus bags of garbage per day that would get emptied several times a day,” Pratt recalls. “Now we maybe have two bags of garbage per day. It’s faster to grind than to gather and change bags and take out trash. We took one 3-yard Dumpster out of our trash dock, and we don’t use very many trash liners now because we took all but a couple of our 30-gallon cans out.” 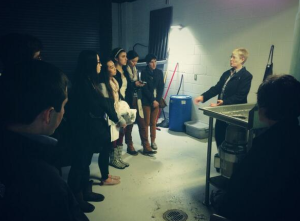 As often is the case with new technologies and processes, Pratt encountered complaints from the stewards asked to grind food waste rather than dispose of it in more traditional ways. “Last fall, I heard a lot of grumbling as we hired new students for our service and stewarding staff,” she recalls. “I had a meeting with the stewarding department and showed them a YouTube video the Grind2Energy folks sent me. All the data collected in it is from here, and I let them know how proud they should be for being part of this program that’s being developed to change energy production in the future. The attitude completely changed.”

Pratt and Krems know there is much more education needed to help Americans embrace anaerobic digestion as a form of renewable energy. “I think the key is thinking about a food-waste bin as an energy container rather than a compost or landfill bin. If you think every piece of food waste you put in here is going to create energy, it begins to transform the waste generator’s mindset,” Krems says.

Pratt is eager to do what she can to expand market awareness and acceptance. She currently gives tours of the grinding process to interested parties.

“This is definitely the way the future is going. Why wouldn’t we make electricity and gas out of our trash rather than relying on foreign countries for fuel?” Pratt notes. “I see a future where neighborhoods have a holding tank and everything you grind into your garbage disposal goes into the holding tank [for delivery to] the anaerobic digester plant to make electricity for your neighborhood. It’s so simple, it’s crazy!”

View a video about how the Grind2Energy system works.

Anaerobic digestion currently is being used in 1,200 wastewater-treatment plants across the U.S. to stabilize sewage sludge leftover from the treatment process and power the plants. There also are about 250 farms across the nation that have anaerobic digesters to handle manure, which is used to heat and power the farms. A farm in Massachusetts has begun accepting food waste from the community and is creating biogas to not only heat and power the farm, but also to sell back to the grid.

The ban, regulated by the Massachusetts Department of Environmental Protection, will require any entity that disposes of at least 1 ton of organic material per week to donate or repurpose the usable food. Any remaining food waste will be shipped to an anaerobic-digestion facility, where it will be converted to clean energy, or sent to composting and animal-feed operations.

To ensure sufficient facilities to manage the organic material resulting from the ban, the Patrick Administration is working to site composting and anaerobic-digestion operations on farms, wastewater-treatment plants, and other public and private locations by providing technical assistance and up to $1 million in grants. The first anaerobic-digestion grant of $100,000 was awarded to the Massachusetts Water Resources Agency (MWRA) for its wastewater-treatment plant at Deer Island. MWRA currently processes sludge in 12 massive, egg-shaped digesters and utilizes the biogas created to provide heat and electricity for the plant. A pilot project later this year will introduce food waste into one of the chambers to determine the effects of co-digestion on operations and biogas production. Learn more about Massachusetts’ food-waste and organics ban and implementation.

Unusual and Inspiring Projects and Strategies Are Applauded