Before Oklahoma’s Broken Arrow Public Schools renovated and expanded South Intermediate High School, nearly 200 classrooms throughout the district were in portable buildings. Students and educators were in dire need of permanent space. The $9.4 million project renovated 9,800 square feet and added approximately 33,700 square feet of space. Tubelite‘s storefront, curtainwall and entrance systems help convey a sense of connectedness across the large campus while offering outside views and natural daylight. 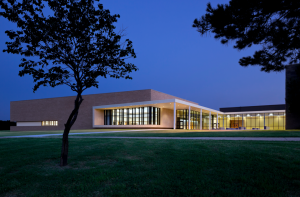 Architectural Glass and Metal Inc. installed more than 390 linear feet of Tubelite’s products, under the guidance of CMS Willowbrook who served as general contractor. South Intermediate High School remained open throughout construction of the project, which started in September 2011 and continued through December 2012. Today, the high school actively serves 1,400 students in grades 9 to 12.

A simple planning strategy was used to integrate the school’s existing structures with the expansion. The design created a courtyard that can be used for impromptu outdoor theatrical plays, as a pre-function space for basketball games, as a space for art projects, or for large all-school assemblies. “The courtyard gives the school a new identity. Visual and layered connections between arts and athletics facilitate a blended approach to community and education,” said Perkins+Will’s principal and k-12 regional practice leader, Patrick Glenn, AIA, REFP, LEED AP.

Oriented to capture indirect northern daylight, the courtyard provides deep overhangs to block the western and southern sun, while allowing for eastern morning light in the new art room. The art room is part of a massive, 33,700-square-foot multi-faceted performing arts addition. This addition was substantially complete in December 2012. Along with the art room, it houses a centralized theater, media center, art gallery, band hall, orchestra room and a choir rehearsal hall.

Oklahoma limestone topped with a sleek metal panel eyebrow and canopy denotes the performing arts center’s entry. According to Glenn, Tubelite’s products were used extensively throughout the performing arts facility addition. He noted, “Layering a sequence of spaces – outdoor to indoor and protected to open – promotes a hierarchy of arrival and gathering. The design provides a transparent wrapper crafting an indoor/outdoor destination and concentration for arts and the community. The pre-function lobby provides openness and transparency to the courtyard, while becoming a beacon for evening community events.” 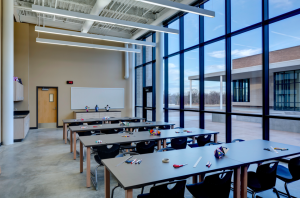 On the new academic wing, large amounts of clear glazing continue to promote transparency from indoor to outdoor space.

The project’s enduring and outstanding design earned a 2013 Built: Design Award from the American Institute of Architects’ Dallas, the chapter’s highest recognition of excellence.

“This project was a joint effort between the architects who brought their design skills to the table for conversations with the teachers and other end users of the facility,” said Michelle Bergwall, chief operating officer for operational services for Broken Arrow Public Schools. “The result is a building that is both beautiful and practical for daily operations.”

PORCELANOSA Renovates Its Showroom in Miami