The Prudential Plaza is one of the most recognizable landmarks in Chicago’s East Loop. Managed by Jones Lang LaSalle, the 60-year-old One Prudential Plaza building embarked on a $100 million upgrade to its Class A, high-rise office tower. Its façade was restored for improved aesthetics and comfort for building tenants. Working closely with Apogee’s Building Retrofit Strategy team, Auburn Corp. replaced more than 1,200 bays of existing single-pane windows with Wausau Window and Wall Systems’ energy-efficient units. 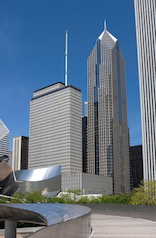 At the time of the installation of the original windows, the center pivot units were intended to make the cleaning of the windows easier by rotating the windows inward. However, the seals on the windows failed and the windows were caulked shut to reduce air and water infiltration.

“The windows throughout One Prudential Plaza were original to the building. The overall appearance of the windows was the first thing that would catch your eye when you walked onto a floor,” explains Greg Prather, senior vice-president and group manager at Jones Lang LaSalle.

Previously known as The Prudential Building, its construction was completed in 1955 as the headquarters to the Prudential Mid American Company. The 41-story structure remained the tallest building in Chicago for 21 years. Architects Naess and Murphy designed the tower with large floor plates to yield 1.2 million square feet of space.

Today, Prudential Plaza overlooks the world-class Millennium Park, just blocks away from the breathtaking Chicago Lakefront. According to Prather, “The best views in the city can be seen from the south elevation of the building. The new windows in the Prudential building are the picture frames for the views that attract new tenants to the building.”

At the time of the installation of the original windows, the center pivot units were intended to make the cleaning of the windows easier by rotating the windows inward. However, the seals on the windows failed and the windows were caulked shut to reduce air and water infiltration.

“Tenant comfort is extremely important to the leasing efforts of a building. Prospective tenants are a lot more savvy than many people give them credit for. The first impression they get when they walk into a space can make or break a showing,” Prather notes. “If the first thing a prospective tenant sees are old, single-pane windows that are caulked shut, their first impression is going to be they are in an old space, with old infrastructure and will receive complaints from their employees for the life of their lease.”

Replacing One Prudential Plaza’s windows was a key consideration when the owners and the leasing team developed the leasing strategy. Prather elaborates, “We got a lot of feedback from prospective tenants who viewed the space prior to the windows being replaced, and it was not positive. Our new tenants would not have signed leases without the windows being replaced.”

Prather adds, “We spent a lot of money upgrading the windows, but it was an investment that had to be made and convincing ownership to make the investment was a pretty easy sell.” To support the best return on this investment, Apogee’s Building Retrofit Strategy team conducted energy modeling with respect to site-specific and building-specific conditions. 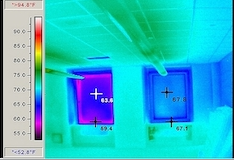 “Bringing in the experts from Apogee and Wausau to coach me on the nuances of window construction was the smartest thing I could do, though I did not realize it at the time,” concludes Prather. The property management team also followed Apogee’s suggested strategy of installing the windows prior to undertaking further energy efficiency initiatives.

“When I first spoke to Apogee and Wausau, I really did not understand the difference between Architectural (AW) grade windows and the other window product we were contemplating,” admits Prather. “I had no idea there was a significant difference in the construction of commercially available windows and the impact wind-load has on the selection of the appropriate product.”

Contributing to a safer, more comfortable, energy-efficient and attractive workplace, Jones Lang LaSalle decided upon Wausau’s AAMA AW-100 Performance Class, high-performance 4250i INvent Series windows with polyamide thermal barriers and Viracon’s VE1-2M glass. Linetec finished the windows’ aluminum framing in a clear anodize on the interior and a durable 70 percent PVDF in white for the exterior.

“The combination of these high-performance components, Wausau’s experienced engineering and quality fabrication allow our INvent Series windows to achieve NFRC U-Factors as low as 0.34 and a CRF as high as 65, aided by the 4.5-inch-deep systems,” explains Terry Iczkowski, Wausau’s local representative. “These windows also offer acoustic performance with STC (Sound Transmission Class) ratings of 31 to 42, further improving the occupants’ interior comfort.”

Jim Price, manager of business development at Auburn Corp., added, “The new Wausau INvent highly thermally efficient window was selected not only because of its thermal design, but also for its ability to perform in an application with high design pressures with close proximity to Lake Michigan.”

Auburn Corp., a window erection contractor based in Illinois, celebrated its 100th anniversary in 2014. It began its work on this historic window replacement project in autumn 2013 on the property’s vacant offices. It resumed in spring 2014 on occupied spaces and concluded in December 2014. 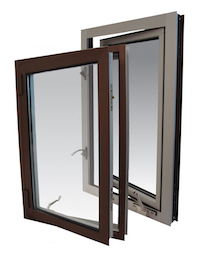 Working in phases minimized disruption to One Prudential Plaza’s occupants. Auburn Corp.’s field team members would enter an office at a scheduled time and carefully remove the existing pivot window. These old windows were taken back to Auburn’s facility and disassembled for scrap materials, which were recycled and avoided landfill waste. At the project site, other team members would prepare the opening and install the new Wausau unit.

The average single-unit opening’s dimensions span 4 by 5.75 feet, which means each unit weighed approximately 145 pounds, estimates Iczkowski. He adds, “Most were single windows, but a few were twice as big and had two windows in the bay. We’re very proud that the new units provide a dramatic improvement in appearance and performance to this architecturally and economically significant property.”

Prather also was pleased that “the materials were delivered according to schedule, as per the specifications and without any drama. Auburn Windows was our selected installation contractor based on its experience and performed in an exceptional manner and replaced all the windows without incident. I would sign another contract with Auburn Windows again tomorrow, and for me that is very high praise, indeed.”

Today, window appearance and performance are one of many key selling points on every leasing tour Jones Lang LaSalle conducts at One Prudential Plaza. Among the many other upgrades being made to the building are a new rooftop deck, new fitness center and tenant lounge, major lobby renovation and the replacement of the perimeter induction units with new chilled beam technology.

As part of Prudential Plaza, One Prudential Plaza shares a common lobby and mezzanine level with a second, Class A office tower. Together, they total 2.2 million square feet and occupy a full city block.

House Retrofit Project Will Be Prototype of Efficiency