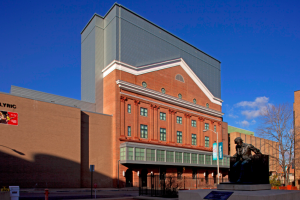 After a four-phase renovation and major expansion, the Lyric Opera House has become Baltimore’s premier venue for opera and traveling Broadway shows.

The historic Lyric Opera House in Baltimore was originally constructed in 1895 as a concert hall with a traditional gable roof. Now, after a four-phase renovation and major expansion, The Lyric has become the city’s premier venue for opera and traveling Broadway shows.

Architectural design for the project was provided by RCG Architects, Baltimore. RCG initally programmed a comprehensive master plan, which has resulted in four subsequent phases of renovations and expansions. Phase One included renovation and modernization of the 2,600 seat auditorium, listed on the Maryland Historic Trust, and a major lobby addition. All new MEP systems were carefully integrated into the historic fabric of the building. Phase Two consisted of a new loading dock, freight elevator and mechanical rooms. RCG’s design for Phase Three, the 20,000-square-foot additioon, houses back-of-house support spaces, administrative offices, additional wing space for sets and rehearsal rooms. The Phase Three Addition was the recipient of two AIA design awards.

Just completed, the newest and most sweeping change in the theater’s long and distinguished history is a new 95-foot tall stage house designed to accommodate full scale grand opera and today’s Broadway touring productions. The stage is expanded in depth with a new cross-over bridge suspended over a sidewalk below will allow for more effective use of the stage. The stagehouse expansion was recipient of a 2002 AIA Baltimore Design Award. RCG is also currently working with the center on the implementation of a five-year modernization plan, including additional women’s toilet rooms, lobby improvements, patron enhancements, exterior marquee and reconfigured balcony seating. 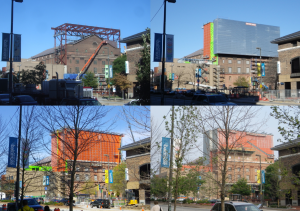 The most obvious element of the renovation is the addition of a 95-foot tall stage house designed to accommodate full-scale grand opera and today’s touring Broadway productions. The stage house (also known as a fly tower) is dramatically clad with approximately 20,000 square feet of RHEINZINK Horizontal Reveal Panels finished with Pre-weathered Blue Gray. RHEINZINK was also used to clad a “crossover bridge” close to street level that allows actors to move from one side of the stage to the other.

“For structural reasons, we needed to keep down the weight of the façade material,” says Jonathan Fishman, RCG’s principal-in-charge. “We didn’t want to use traditional metal panels. We selected the RHEINZINK for two reasons. First, the owner liked the idea of a durable material that would effectively last forever—at least hundreds of years. Second, we also wanted a natural material, not a painted metal. The color of the RHEINZINK was appealing because we wanted the fly tower to blend into the sky. The gray seems to recede instead of coming forward. And the RHEINZINK works nicely with the brick. The palette is very pleasing.” 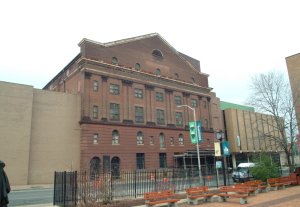 The historic Lyric Opera House was constructed in 1895 as a concert hall.

Fabrication and installation of the RHEINZINK was done by Metal Sales & Service Inc., Kennett Square, Pa. According to sales representative Steve Scharr: “The greatest challenge was working within existing conditions of a very old building. With a renovation like this, you can’t lay out the building in advance. You have to build to fit. But reforming an historic old building into a new structure was really fascinating.”

Cladding the crossover bridge slightly above street level required a different product application of the RHEINZINK. “The crossover was clad with custom-formed soffits, fascia and column covers,” Scharr adds. “We love working with zinc. It’s really a beautiful material that’s easy to fabricate.”

The RHEINZINK distributor on the project was MetalTech—USA, Peachtree City, Ga.

Be the first to comment on "Opera House Undergoes Four-phase Renovation, Including Expansion Clad in Zinc"