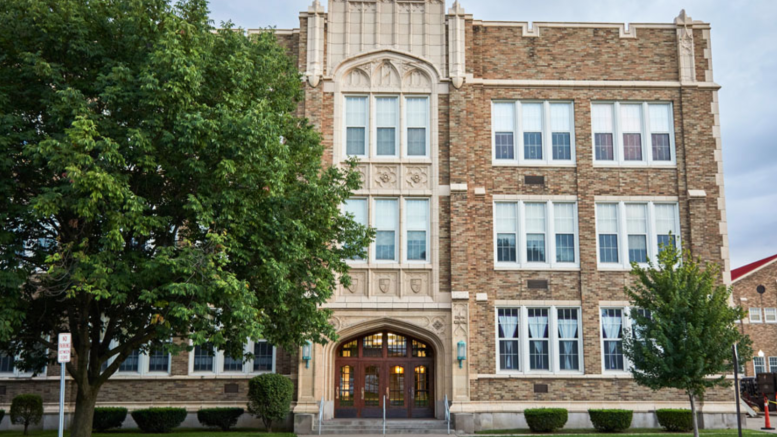 Centrally located and surrounded by Victorian-era homes, the quirky and iconic high school building in Quincy, Ill., was constructed in 1933 and eventually transitioned to become Quincy Junior High School in 1957. By 2018, the building’s many original wood doors were showing their age and beginning to deteriorate.

The doors were spread across 12 different entrances, each one unique—in size, entry shape, details and number of doors. While the door panels were the same for every entrance, the decorative trim and mull covers in between the doors and transoms differed slightly from one entrance to the next. None of the transoms were alike: the various entrances included Gothic, discontinuous radii and segment top transoms, all with true divided lites. The main entrance featured three Gothic transoms with the school’s crests rendered in stained glass.

Because the school building was constructed prior to modern building codes, there were multiple code-compliance and safety issues. The original doors were not constructed with sills; instead, each door featured a sweep abutting concrete.

In addition to these challenges, two concerns stood above the rest.

One: multiple entrances featured no overhang or very minimal ones at best. The old growth oak used in the original doors had managed to stand up to almost a century of weather and water; with that type of material no longer used in modern door construction, replacing the doors with wood was not feasible.

Two: the limestone, granite and concrete of the building had settled over time so that the entrances were uneven, with one side slightly different in height than the other side of the same entrance. “We found out that none of these doors were alike,” remembers JELD-WEN Architectural Consultant Eric Miller. “Every opening was different. The school was so old, you could see where people had walked on the concrete at the entrances over and over again in some places and there were indentations inside of it.”

The challenge for JELD-WEN was to create multiple specific, precisely detailed doors and transoms that matched the design of the originals and met historical requirements; that could stand up to sun, rain, and snow even without an overhang; that met all current building codes and achieved ADA compliance; and that were engineered for outstanding appearance and longevity.

Miller spent two days measuring and photographing the doors, transoms and openings, working to understand the design, construction, and efficacy of the door systems and the myriad custom components. He created hand renderings to explain the many pieces and parts and had the JELD-WEN team create shop drawings for each entrance. “These [doors] were literally handmade. We had to figure out how to recreate that and try to do it better with modern materials,” he explains. “There was a lot of complexity.“

But Miller’s main concern was the absence of overhangs: “Not one single door had the appropriate overhang exposure coefficient that we require for wood doors.” That shifted the conversation to JELD-WEN’s IWP Aurora custom fiberglass exterior doors, crafted to look virtually indistinguishable from real wood and deliver lasting beauty and durability.

The next step was a presentation to the State Historic Preservation Office (SHPO) and the school board. “We brought in two door samples, and not one person attending could discern which door was fiberglass and which one was wood. So they saw the quality, they understood from prior project photos the customization capabilities of the Aurora product, and the fact that we could be within all the tolerances that SHPO wanted,” Miller says. “The drawings helped them visualize what the doors would look like, which was identical to what was there, just much cleaner.” JELD-WEN was approved to proceed.

The new doors needed to meet modern codes, as well as defend against air and water infiltration. So thorough consideration was required upfront.

“There wasn’t one single thing that didn’t have to be reviewed and understood and discussed. We had to figure out how to size the doors properly. We had to talk to electricians. We had to talk to all these different people who were working on the project just to make sure everyone understood how these doors were going to come out. How they would be applied to the building and installed. Where they were going to run their wires. How the hardware would be set up and everything else,” Miller recalls.

The construction of Aurora fiberglass doors begins with creating realistic molds from true wood doors, picking up character marks and woodgrain details. For Quincy Junior High School, the Aurora plant made several wood doors shaped to match the grid patterns and profiles of the original school doors and then created molds of each. Using molds from different doors ensured that the woodgrain pattern would not be identical from one finished door to the next.

The original doors included decorative wood appliques that produced an eyebrow design. To maintain the look without adding components, the eyebrows were designed into the wood doors used as molds, so that both slab and eyebrows emerged as one solid piece of fiberglass. Later, the eyebrows were finished with additional antiquing and distressing techniques to create the appearance of separate pieces.

The center mull posts between the doors were constructed 4-inches wide and 7-inhces thick from solid pieces of mahogany. This allowed room for the electric raceways needed to incorporate the ADA-compliant hardware the doors would require. Each post was an integral piece of the structural stability of the assembly and featured an indentation designed to shed water.

JELD-WEN drew and provided both the classical ogee exterior trim around the door frames and the different trim profile and center mull post covers on the inside of each entrance. To recreate the original horizontal mull cover between the doors and transoms, Miller measured the cover, drew it by hand, and sent his drawing and the measurements to be put into CAD. The plant had to make new knives to recreate the original wood pieces. The process “really speaks to our capability of replicating anything out there or creating new designs,” Miller says.

The manufacturing team behind IWP Wood doors was challenged to engineer and produce the school’s complex and diverse transom windows—and to come up with ideas for longevity that would surpass expectations.

Miller recalls: “They looked at the shop drawings we originally produced and my hand renderings, and they made modifications to make the product more stable. They asked our CAD team to redraw it with their ideas for making the product last longer, for making it a little easier to install in the field, for water shedding. It was amazing. They came up with ideas that made our doors more durable than the originals.”

The plant’s design alterations not only fit within codes but also improved performance. One change was to make the bottom frames of the windows thicker and deeper, giving them an 8-degree bevel, so that the angled design would naturally encourage snow and water shedding. This modification also simplified the design of the horizontal mull assembly.

To create radius frames with significant depth and strength, multiple solid pieces of mahogany were stacked and molded together. Triple-pane true divided lites were used to match each transom’s original appearance and to optimize energy efficiency. The school crests showcased in the three Gothic transoms of the front entrance were replicated with stained glass.

The Aurora doors’ finishing process involves multiple applications of stain, each hand applied, with “knots” and “imperfections” accentuated. The multiple layers add the depth of shading and richness that gives the doors the look of real wood. Once completed, the finish can stand up to even harsh climates. “That’s why we can put [Aurora doors] on the face of a building with no overhang without the doors degrading. The finish is going to last,” Miller explains.

Aurora’s finish process also allowed the fiberglass doors to take on the same warm, rich color as the wood transoms, for a consistent look across each door system. To make them look even more authentic, both transoms and doors were treated with fading, distressing, and antiquing finishing techniques.

A perfect fit the first time

When Miller first measured the entrance openings, he discovered that none of them were plumb, level or square. One side would be down 9/16 of an inch compared to the other due to the age of the building, the settling of the original construction materials and nearly a century of foot traffic.

“We expected that to some degree,” Westerhoff recalls, “even among the entrances that appear multiple times on the building. With the building being over 80 years old, it’s going to shift over time. The field measurements had to be precise.“

Before manufacturing began, the JELD-WEN team took an abundance of field measurements and worked hand-in-hand with the installers to create templates for the factory to review as they crafted the product. The collaboration and careful planning paid off. Every door fit within a quarter-inch tolerance of existing conditions, the historical requirement set by SHPO. The doors, transoms, mull posts, and casing aligned perfectly.

“I was so proud to see those reveals,” Miller remembers. “For the size of the doors, the height, the variations—our factory made everything, and it all fit within a quarter-inch tolerance. The installers were blown away. They didn’t think that was possible.”

The original wood doors’ handle sets were cleaned and reinstalled in the new fiberglass doors. To outfit the doors to meet code and achieve ADA compliance, channels were cut into the concrete below the doors to accommodate electric strikes and push-pedal hardware. The electric raceways built into the center mull posts enabled the use of electric panic bars.

Once the doors were officially revealed, the stakeholders were “just ecstatic,” says Miller. “They were blown away by the quality and the fit and finish.”

“[The entrances] turned out fantastic. The school board and the local historical society were pleased. There was some skepticism that it would come together as well as it did, but I think everyone was pleased with how it turned out,” Westerhoff says.