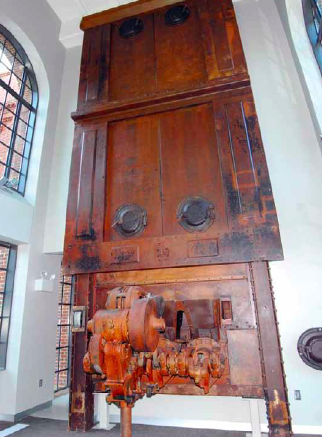 The plant's former office was turned into a lobby/museum that displays one of its salvaged iron coal boiler fronts.

When Durham, N.C.-based Duke University’s steam plant was built 100 yards from the railroad tracks near East Campus in 1927, it was heralded as one of the best in its class, featuring Georgian architecture with 2-story-tall window arches and interior oak finishes. At a cost of $440,000 during the unsteady financial times of the late 1920s, the steam plant included architectural features and touches uncommon for an industrial building. Cornices, decorative brickwork and inset square concrete panels resemble details of tobacco factories and warehouses. Rail cars delivered coal along a trestle to a corrugated-metal shed on the plant’s roof. From there, the coal dropped through floor gates to three furnaces below. For about 50 years, the plant’s coal-fired boilers supplied steam through underground pipelines and tunnels to heat campus buildings in concert with the West Campus Steam Plant, which also was constructed in 1927.

In 2007, however, the university embarked on a study to increase steam capacity to catch up with the growth of space on campus. After evaluating several options, renovating the East Campus Steam Plant was selected as the best use of the historic building and an opportunity to revitalize that part of campus. Initially the East plant was only to be used as a peaking plant to supplant the coal-fired boilers at the West Campus Steam Plant. However, as the renovation design was nearing completion in 2008, Duke University expanded its sustainability initiatives to include a commitment to reduce greenhouse gases. 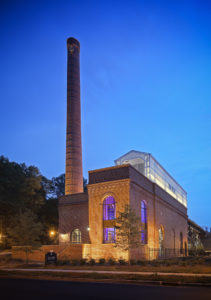 One of the goals for the East Campus Steam Plant was to provide a maximum amount of capacity without significantly impacting the building’s Georgian architecture.

This commitment was made by Duke President Richard Brodhead as part of the American College & University Presidents Climate Commitment, which asks America’s higher-education entities to measure and report their emissions, take immediate steps to reduce them, and develop and implement a plan to go climate neutral. After more than a year of preparing a Climate Action Plan (CAP), the administration presented and received approval of the CAP by the Duke Board of Trustees in October 2009. The most significant and immediate action that Duke could take on campus was to stop burning coal. The effort to retrofit the East Campus steam plant took on a new goal of helping Duke become a climate-neutral campus.

The design team quickly responded to this challenge and incorporated changes to make the East Campus Steam Plant a base plant. Because the plant was to maximize its output of gas-fired steam production, it required a higher level of reliability and maintainability. In conjunction with the CAP goal of not using coal, the Facilities Engineering staff had to plan for the future growth of campus and include additional steam capacity for a campus that grows approximately 200,000 gross square feet on average annually.

Russell Thompson is director of utilities and engineering for Facilities Management at Duke University, Durham, N.C.

Be the first to comment on "Out with the Coal"