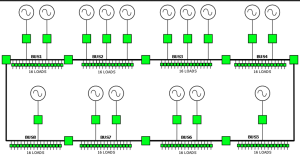 Emerson Network Power, a business of Emerson and a global leader in maximizing availability, capacity and efficiency of critical infrastructure, has introduced a breakthrough in paralleling and controlling multiple electrical bus onsite power systems.

The new ASCO Multiple Bus Load and Generator Control software makes it possible for a single programmable logic controller (PLC) in ASCO Generator Paralleling Switchgear to reliably operate up to eight independent multiple buses simultaneously with full, feature-rich functionality. In addition, when multiple buses are part of a 3 phase, complex tie breaker connected ring, the ASCO Multiple Bus Load and Generator Control software offers the flexibility to operate any combination of the buses as a single system, or separately when they’re disconnected, again with full functionality.

Sacrificing such functionalities as block loading, bus optimization, load shed bypass, and load demand limited control flexibility, but no more. All those functionalities now occur independently on isolated buses and simultaneously on buses with tie breakers.

In fact, ASCO Multiple Bus Load and Generator Control software enhances operational flexibility. Hospitals and other mission critical facilities, such as data centers, often want to power more than priority one loads. But closing and opening tie breakers for multiple loads on multiple buses to connect with multiple gen-sets could be problematic. Now, they can manage that process automatically, even if they have two entirely separate systems and want to manage them with one PLC. In addition, servicing a tie breaker bus is easier since gen-sets and loads can be routed to other buses. These capabilities improve overall system reliability.

The software’s capabilities can be compared to replacing a single core “brain” of a master PLC program with eight core “brains”.

ASCO Multiple Bus Load and Generator Control software drives a PLC in the Master section of the lineup. It controls up to 16 gen-sets and 128 loads spread across up to eight buses. It is suitable for both standard and mission-critical applications, and low- and medium voltage systems.

ASCO Multiple Bus Load and Generator Control software already has been integrated in ASCO Generator Paralleling Switchgear for a public safety and answering center. Two buses are designed to operate independently, unless an on-site gen-set fails on one of them, In that event, the PLC is programmed to connect the two buses so a ‘swing’ gen-set on the other bus can power the load.

Electrical Preventative Maintenance and Its Implications for Controlling Costs