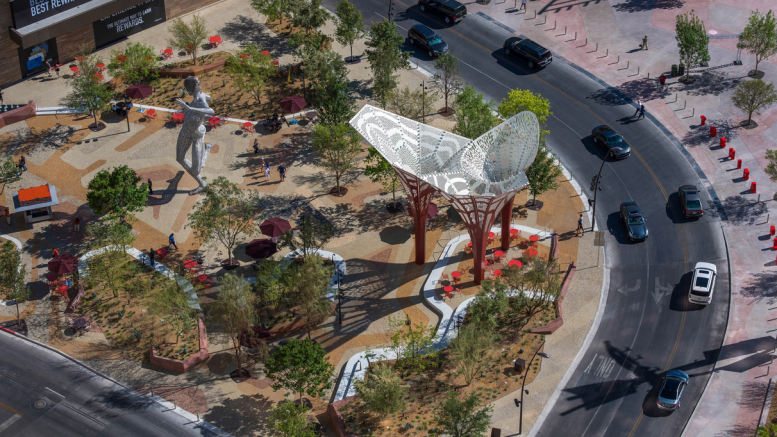 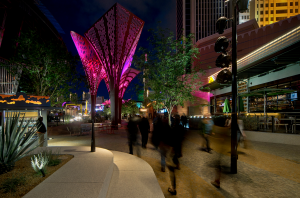 The master plan arose from an invited competition held by MGM Resorts and won by the collaborative team of New York-based master planner Cooper Robertson, working with Marnell Architecture, Las Vegas, and landscape firm !melk, New York. Spanning more than 8 acres, The Park transforms the space between the two resorts with a series of indoor/outdoor venues and realigns a side street, Rue de Monte Carlo, as a gently curving, tree-lined parkway. The resulting atmosphere recalls a grand European promenade or plaza but with inimitable Vegas flair.

Framed by a lushly landscaped setting with water elements, outdoor dining terraces and informal performance spaces, the plan removes barriers between the public right-of-way and the resort buildings and regularizes elevations to more seamlessly connect to the Strip.

“The Las Vegas Strip is one of the most visited tourist destinations in the world and, as the city continues to evolve, organizations like MGM Resorts are recognizing the importance of including true urban functions and experiences,” says Donald Clinton, AIA, MRAIC, LEED AP, a partner at Cooper Robertson. “The Park concept reflects an important investment in master planning and public space and establishes an unprecedented pedestrian environment in a city not widely credited for its public realm.”