The Fort LeBoeuf School District in northwest Pennsylvania faced a problem common to many school districts: Aging infrastructure and rising utility costs were putting a strain on budgets at a time when every dollar needed to be focused on student achievement. Fortunately, the state’s Guaranteed Energy Savings Act, or GESA, program provided a mechanism to finance facility improvements and pay for them with money saved through lower utility charges, operational savings and capital avoidance.

The Fort LeBoeuf School District, which is located in Waterford, just south of Erie, has a total enrollment of 2,100 students from a geographical area encompassing 112 square miles. The district’s five school buildings include a high school, middle school and three elementary schools with 278,000 square feet of instructional area. With its facilities needing immediate attention and confidence that high annual energy consumption and related utility costs would be enough to pay for the necessary improvements, the district issued a Request for Proposal for facility retrofits and renovations in accordance with the state’s GESA program.

SmartEdge, a certified energy services company with offices in western New York and northwest Pennsylvania, responded to the RFP and Fort LeBoeuf school officials selected the company to conduct a comprehensive energy assessment (CEA) of the district’s buildings. SmartEdge is a provider of facility-control products, systems and support, as well as a member of the InsideIQ Building Automation Alliance, an international alliance of independent building automation contractors. The SmartEdge CEA included a number of energy-conservation measures (ECMs) that delivered many long-term benefits for the school district, including improved facility efficiency and occupant comfort, reduced operational costs and positive environmental impacts associated with reduced carbon footprints.

Based on the results of the CEA, the district decided to proceed with the implementation of the recommended ECMs in all its buildings except one elementary school. The Robison Elementary campus was set aside in anticipation of a separate capital project planned to address major issues in that building. The first phase of the facility-enhancement plan, implemented at a cost of $1.3 million, focused on four of the district’s school buildings. SmartEdge completed upgrades to interior and exterior lighting, installed new HVAC-system controls, optimized boiler-plant operations, retrocommissioned major HVAC equipment, rebalanced airflows and installed a new high-efficiency chiller at one of the elementary schools. 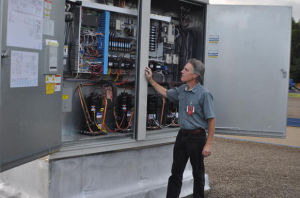 The first phase of the facility-enhancement program, completed in December 2012, reduced annual electrical consumption by more than 965,000 kilowatt-hours, or approximately 30 percent, and reduced annual gas consumption by over 37,000 centum cubic feet, or 24 percent. Electric consumption at the four schools declined to 7.7 kWh per square foot, or 11 percent below the national average for schools. The gas savings brought the schools in line with the national average as compared to being 35 percent above the average before the project.

Based on current energy unit costs, the reduced consumption lowered annual utility costs by $110,000 while operations and maintenance cost savings are estimated to be an additional $19,000 annually. In addition to the reduction in energy costs, the district also received more than $25,000 in utility rebates for lighting upgrades, new motors and variable frequency speed drives. Looking forward, capital investment for future school renovations was lowered by $930,000 because of the new equipment installed.

The project also had a positive environmental impact. Implementing the ECMs reduced CO2 emissions by the district by more than 480 metric tons per year, which is equivalent to the emissions generated by burning more than 500,000 gallons of gasoline or absorbed by 93 acres of forest.

retrofit’s Inaugural Conference Is a Success

Surface Mount Fixture Is an Alternative to Recessed Products