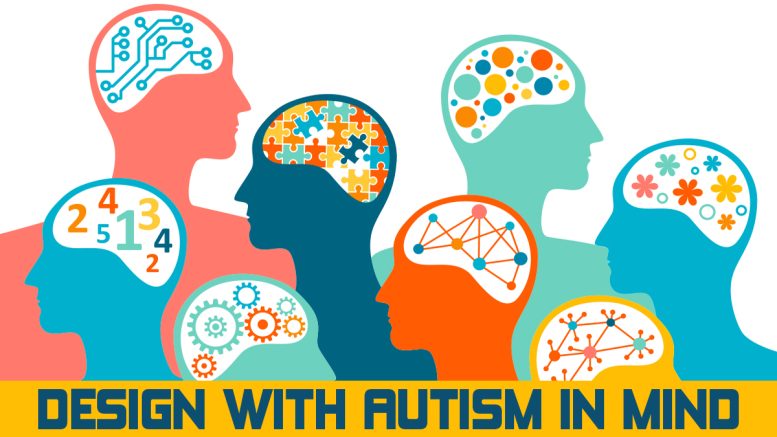 Professionals who design building structures typically do not take into account the perceptual and/or cognitive challenges experienced by individuals with various disabilities. Sometimes these challenges are referred to as the “invisible disabilities” within the inclusiveness community. Moreover, when designers are asked to consider the users’ perceptual and/or cognitive disabilities, they often rely on intuition rather than on an agreed-upon, science-based approach. Consequently, the need for objective standards is paramount, given the increasing number of residential facilities, therapeutic clinics, and employment settings currently being designed for those with autism and other disabilities.

The Americans with Disabilities Act (ADA) mandates the need for inclusive design for those with disabilities to properly access building structures. Yet, much of ADA is non-specific about perceptual and cognitive disabilities. Therefore, I urge professional designers to bear in mind various populations who suffer from perceptual and/or cognitive challenges. These challenges include aging, dementia, autism, mental illness, ADHD, PTSD, SPD, blindness and deafness. Individuals with these challenges often experience numerous problems, including sensory hypersensitivity, limited sensory sensitivity, cognitive problems and anxiety. Such issues affect at least 40 percent of the general population, according to the 2016 Disability Statistics Annual Report from the Rehabilitation Research and Training Center on Disability Statistics and Demographics.

Consistent with the intent of the ADA, individuals do not have full access to a building’s structure if they cannot adequately process information in their surroundings, which can lead to challenges in navigation, attention, work ability, comfort level and much more.

In 2006, my firm, Orfield Laboratories Inc., began a 10-year journey researching perceptual and cognitive disabilities from a user perspective, starting with aging, dementia and autism. This included thousands of hours of discussions with top academic and research experts associated with each area of sensation, such as vision and hearing, and each of the specialized disabilities, including aging, autism and mental illness. Eventually, we came to the realization that one should not design for a diagnosis, but rather, one should design for the best predictable user experience. We also concluded that approximately half the general population needs quiet and simplicity, and the results of disability-based design are preferred by those in the “neurotypical” world.

All of these assumptions are incorrect, and they underlie the failure to solve many of the design challenges for those with disabilities.

The Architectural Research Consortium, which is administered by Orfield Laboratories, has stated that any modest or large-scale building can be built with a similar budget for individuals with and without disabilities. For example, a well-designed interior is more important than an expensive façade and an elaborate public entry. Furthermore, aesthetics should be more about a comfortable appearance than expensive finishes.

The Design Research Concept of Autism

Fraser Clinic, located in Woodbury, Minn., is the first autism project world- wide that involved quantifiable perceptual performance standards that focused on the sensory sensitivity of children and adults on the spectrum. Prior to working on this project, we spent much time discussing daily challenges—with an emphasis on sensory sensitivity—with two dozen individuals with Asperger’s syndrome. Their personal experiences were very helpful when forming our approach to designing a user-experience building environment.

As a result of our approach to understanding individuals with autism, as well as designing structures for them, we focused our efforts on those who are hypersensitive to sensory sensations in their environment. We do acknowledge that there are at least two other “sensory” groups in autism, including those who are hyposensitive and often crave sensory stimulation (sensory seeking) and those who do not have any sensory challenges.

Fraser Clinic representatives began working with Pope Associates, an architecture firm, on designing a building that would become a branding statement for Fraser. They also consulted with A. J. Paron-Wildes, who is a designer, the mother of a young man with autism and author of a number of books about design for autism.

Paron-Wildes helped balance the structural design with personal experiences en- countered by individuals on the spectrum. Orfield Laboratories was in charge of reducing, or eliminating, potential sources of sensory-related stress and tension within the clinic. This involved user measurements of acoustics, daylighting, thermal comfort and indoor air quality.

Basically, we did not want the clinic building to be perceived as imposing, institutional or noisy. The primary goals were to create a general familiarity and comfort within the clinic and avoid anything that would trigger hypersensitivity. Our first recommendation was to create a building façade that was more reflective of the sensitivity of children on the spectrum because many of them suffer from anxiety and are fearful of unfamiliar settings. Fraser Clinic staff agreed with us, and the design of the new façade was low-key and suggested a welcoming and peaceful building environment.

Furthermore, the design for all spaces within the clinic was nominally similar because many, if not most, individuals on the spectrum have an aversion to change in their environment. As a result, the building had, in general, a more monolithic design. That is, wherever the individual is located in the building, he or she will perceive the spaces as relatively the same. We also avoided using patterns or complex color schemes, graphics, non-representational pictures and wallcoverings. In many ways, our approach was to design a peaceful and simple, Zen-like environment.

Based on research and experience, Orfield Laboratories established a set of building performance standards for those with autism and special needs. In general, the goal of these building standards is to reduce perceptual noise. These standards were formulated based on 10 years of studying perception and cognition; 20 years of collaborating with national groups, such
as The Open Plan Working Group and Architectural Research Consortium; and more than 30 years of hosting national design- research conferences. (Learn more about the national groups.)

The performance standards were based on visual design research and involved de- fining, modeling, and measuring building environments with respect to perceptual preference and comfort. The results from these analyses provide recommendations regarding the amount of brightness and visual distraction while optimizing feature daylighting along with a pleasant view of the surrounding.

Editor’s Note: The AUTISM RESEARCH INSTITUTE has been actively involved in sensory-related research for the past 30 years. This article first appeared on the institute’s website and has been reprinted with permission.

Steven J. Orfield, founder of Orfield Laboratories Inc., has been involved with architectural and product consulting for more than four decades. He began his career by taking a human-factors approach to architecture with an emphasis on acoustics and lighting in relation to their impact on users’ experiences.