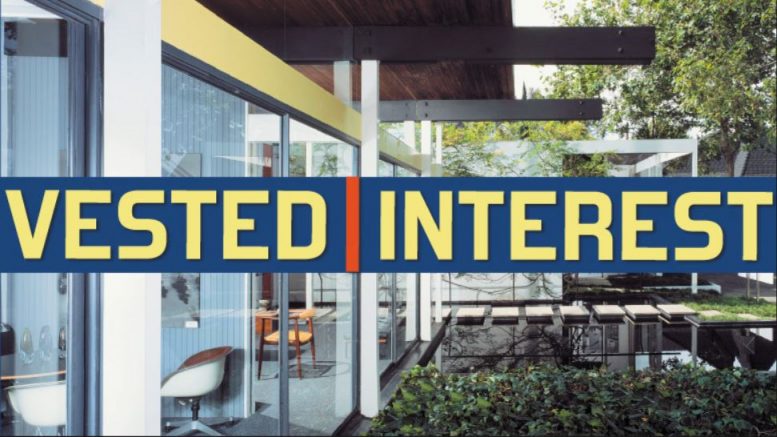 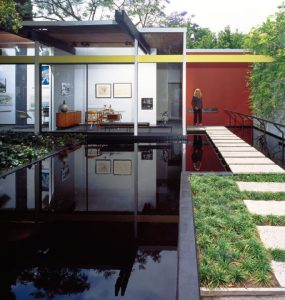 Integration with the landscape is a defining characteristic of mid-century modern design. As such, the Killingsworth Office building features large expanses of glass, skylights, trellises and beams projecting off the roof that carry the structure beyond the building, blurring the lines between inside and out.

Combining the terms “midcentury modern” with “historic preservation” may seem like an oxymoron, but Kelly Sutherlin McLeod, FAIA, is determined to change that perspective. As principal of Kelly Sutherlin McLeod Architecture (KSMA) Inc., Long Beach, Calif., Sutherlin McLeod is involved with the preservation of modern architectural resources on an international level. One of her current preservation projects is the ongoing restoration of the Killingsworth Office Building in Long Beach, a 1955 single-story, 5,000-square-foot structure that now houses her architectural practice. The Killingsworth Office Building exemplifies mid-century modern architecture and is an iconic structure—in its design and because of its designer, Edward A. Killingsworth, FAIA.

“Southern California was recognized worldwide for its role in the development of mid-century modern design, and Killingsworth was an extremely important figure in the movement,” Sutherlin McLeod asserts. “This building was the headquarters for the three firms that Killingsworth had over 20 years, and it was here that he started to explore the design ideals he further developed in subsequent projects.”

Integration with the landscape is a strong characteristic of mid-century modern design and Killingsworth used interior and exterior treatments to make the office building connect to its environment. Large expanses of glass, skylights, trellises and beams projecting off the roof that carry the structure beyond the building all blur the lines between the outside and inside. Every interior space looks out to sky, landscape or semi-private gardens, and the outdoor water feature was designed to reflect surrounding tree canopies and the adjacent building’s interior.

Killingsworth was a master of making the most out of difficult sites. The building is located on a narrow lot along a busy boulevard and backs right up to residential property, yet it feels expansive. “The extension of space created by the roof and floor planes continuing beyond the glass walls make the spaces light and airy,” Sutherlin McLeod explains. “Killingsworth’s objective was to design spaces where the ‘spirit can soar,’ and this is a dynamic and energetic quality that inspires us.”

In addition to having daily interaction in the space, Killingsworth was Sutherlin McLeod’s mentor and friend. The two first met in the late 1980s. Shortly after opening her own practice, Sutherlin McLeod completed a project at California State University, Long Beach, where Killingsworth was the campus’ master planning architect for more than four decades. Their paths also crossed at professional and social events, and they became friends. 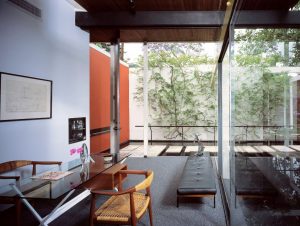 The extension of space created by the roof and floor planes continues beyond the glass walls, giving the space a light, airy feeling where the “spirit can soar,”
a design objective Killingsworth embraced.

Killingsworth told his family that Sutherlin McLeod would be a good steward of the property. Killingsworth passed away in 2004 and Sutherlin McLeod purchased the building in 2005. Over time, Killingsworth had created additions on the north, south and west ends of the building to accommodate his expanding firms, but he did not change the primary street façade nor the original building’s spatial quality. Although the office was a design showcase, the team at KSMA recognized that it was in need of a comprehensive restoration.

Certain aspects of mid-century modern design aren’t necessarily well poised for long-term durability. Sutherlin McLeod explains the spirit of optimism dominating the post-war era encouraged designers to freely experiment with how far they could push the limits of materials, architectural elements and the structure.

The Killingsworth Office Building has an exposed structure with slim, tall vertical wood framing members. The roof is completely flat, and the floor planes are close to the ground outside. Sutherlin McLeod says it is precisely these elements that make the architecture so elegant.

In addition, many of the design features and materials can present challenges over time. “We are familiar with many of the materials mid-century modern designers used, including aluminum, engineered timbers, fiberboards and laminates, which were considered cost-effective at the time,” Sutherlin McLeod says. “But the familiarity of these materials doesn’t mean that we should view these buildings nor their materials as expendable. We cannot be dismissive of this very important part of our architectural history.”

To help ensure the building’s long-term preservation, Sutherlin McLeod had the space listed on the National Register of Historic Places in 2009.

Two Dilapidated Structures Are Transformed into a Vibrant Environment for Working and Living in Boulder, Colo.