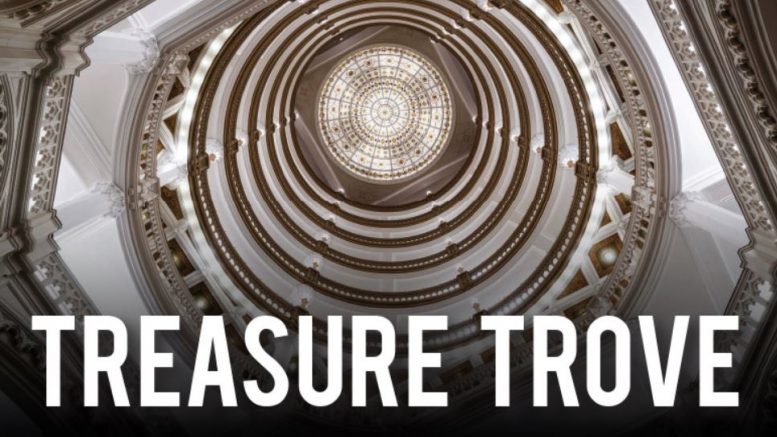 Ornate and impressive, the 1917 Flemish-Gothic Union Trust Building in Pittsburgh’s downtown had become little more than a passageway over the decades. Ill-suited interventions and years of disrepair obscured beautifully detailed interiors in the 541,000-square-foot, 11-story icon. “Inside, it was a dingy and depressing place. People used the atrium as a shortcut from the nearby public transportation to access downtown offices, but no one lingered,” recalls Ross Cameron, a vice president and architect at Elkus Manfredi Architects, the firm that was instrumental in the building’s retrofit. “Now the ground-floor is activated with restaurants, and the atrium lobby is a place where people want to be and be seen. We created a contemporary use for a building that had essentially lost its way.”

Arranged around a central rotunda, the interior is capped by a stained-glass dome designed by Pittsburgh’s Ruby Brothers. The dome had been roofed over decades prior so it no longer functioned as a naturally daylit skylight. Although it had been backlit from above with artificial lighting, the treatment did not properly showcase the glass’s intricate detail. Designers uncovered the dome to cascade daylight down through the 11-story atrium. A new more efficient, brighter lighting system greatly enhanced the color and detail in the stained-glass work. The team also opened up floorplates and ceilings to create unobstructed expanses, which allow diverse floor plans for today’s office culture.

“We left our assumptions behind and strived for authenticity in the project,” notes Elizabeth Lowrey, a principal and designer at Elkus Manfredi Architects. “This meant we had to preserve the values of the Union Trust Building while breathing life into it to support modern uses.”

The project contains 19,060 square feet of richly hued, hand-tufted New Zealand wool carpet manufactured in Thailand. The carpet’s pattern is an exact replica in scale and design of the glass dome soaring directly above. “It’s a bold blue that entices you as soon as you enter the building,” says Chi-Thien Nguyen, a designer at Elkus Manfredi Architects, “and the pattern inspires people to stop, ponder and look up.”

The carpet changes color as one moves up through the building, with gradients of blue ultimately shifting into a gold/amber drawn from the Union Trust’s gold logo on the top floor.

To make the rotunda a place where people would want to spend time, the designers introduced sophisticated, inviting seating for office tenants and restaurant patrons to gather. They also added a 2,100-squarefoot space for a proposed lobby bar/restaurant designed to serve morning breakfast/ coffee, a grab-and-go lunch, or happy hour cocktails.

Beautiful original materials like marble and terra cotta were restored to exhibit the building’s rich history. “We treated the interior almost like a museum but inserted bold colors and objects that stand out,” Nguyen notes. “The deliberately modern interventions, such as the furniture and finishes, announce that a new century has arrived.”

A real-estate investment fund managed by The Davis Companies of Boston owns the Union Trust Building. From the project’s inception, the company’s CEO Jonathan Davis (a Pittsburgh native and arts advocate) wanted to showcase local, contemporary artists. Thirty pieces of original art— paintings, photography and ceramic wall sculpture—were commissioned for the building. For example, 10 dramatic murals line walls on both sides of the elevator lobbies on floors five through 10, as well as walls in the atrium. Bringing all these creative works to the public, the building is on a path for self-guided art walks in Pittsburgh’s cultural district.

The Union Trust Building was full of surprises. It’s rare to find intact documentation in historic structures, but an archive of authentic building blueprint drawings had been stored in some upper floors’ offices. These beautifully hand-drafted blueprints gave rise to the deep blue color of the atrium carpet.

Squirreled away in several storage rooms in the basement, architects also discovered original molds for the building’s terracotta roof tiles.

Despite finding original blueprints, the existing building’s drawings were woefully inadequate. In fact, the Union Trust Building’s existing drawings were missing three entire floors. With much of the building vacant, the team was able to conduct investigative demolition. This led to another exciting surprise. Hidden in the walls of the former mechanical floor space on the upper floors, the team discovered giant structural-steel transfer trusses. “When we peeled off some walls, we found beautifully constructed steel that aligned with today’s design aesthetic so we decided to expose it,” Cameron says. “In addition, showcasing the trusses celebrates Pittsburgh’s industrial legacy.”

Designers programmed the area as the building’s new fitness center, and the historic trusses now give a very contemporary feel to the space.