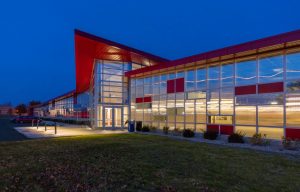 An uninviting warehouse is transformed into a welcoming and innovative learning center.

In a world where factory jobs are being replaced with smart technology and globalization has made the manufacturing industry increasingly competitive, Otterbein University saw an opportunity to transform a mundane, uninviting warehouse into a welcoming and innovative learning center. Partnering with leading organizations from the private and public sectors in central Ohio, Otterbein developed a hands-on curriculum focused on cutting-edge skills in science, technology, engineering, arts and math (STEAM), as well as a state-of-the-art facility for STEAM to thrive.

Accomplishing all of the project’s objectives, a LIGHTWALL 3000 series curtainwall system, which accommodates polycarbonate and glass infill, was customized for the facility. EXTECH engineered the system with deep glazing pockets and low-friction gaskets to allow for thermal movement while providing water- and air-infiltration performance.

To create Moody Nolan’s distinctive geometric design, EXTECH fabricated a new horizontal mullion that allowed for the inclusion of non-continuous vertical framing members. The new mullion “flushed out” the interior surface of the system and allowed it to span up to 8 feet between vertical mullions, doubling the typical span lengths of 4 to 5 feet. The curtainwall system also allowed for the application of point loads from vertical framing members without additional structural reinforcing—horizontals typically deliver their loads to verticals.

The curtainwall’s polycarbonate inserts diffuse daylight to minimize glare on computer screens and other monitors. The high-performance glazing also reduces solar heat gain for a more comfortable learning environment and lessens dependence on electric lighting, which contributes to a more energy-efficient building.

Fabricated as a unitized system, the curtainwall arrived onsite in pre-assembled sections that installed quickly and accurately. In addition, the lightweight polycarbonate portions are easy and quick to set in place. 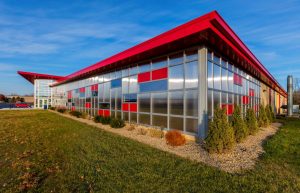 The facility is home to two resident companies and Otterbein academic departments with laboratory space available to businesses and the broader community.

“We thought of how this space is also a starting point, a launching point and a point of innovation,” describes Executive Director Erin Bender. “We thought of the design of this space and the peak that points the way to the entrance to this space while also suggesting a convergence of numerous elements meeting to form a point.”

Otterbein President Kathy Krendl adds: “This building is a purposeful intersection of the best principles and strengths that education, industry, business, research and government each bring to the mix. The work that happens here will offer students, corporations and community partners alike new points of view about how things can and should work.”

Completed on time for Otterbein University’s 2016-17 academic year, the grand opening was celebrated in October 2016 with a “wire-cutting,” a technological pun on “ribbon-cutting.” At the ceremony, President Krendl praised the team effort saying, “We are opening the doors to this place within one year of its approval. A feat like that is only possible when you have the right partners, in the right position at the right time.”

By 2021, conservative estimates show the direct impact of the project will result in the creation of 200 jobs, totaling $16 million in payroll.