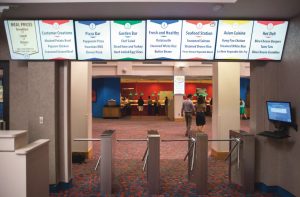 The new turnstiles at PCC include a card reader to better manage meal projections.

There are three dining options, but most of Pensacola Christian College’s (PCC’s) 4,900 students eat in one of two dining facilities— Four Winds or Varsity. The two dining halls serve about 10,000 meals per day, two-thirds of which are served at the Four Winds facility. Meals are served three times a day, seven days a week. Because students are busy, they’re hungry, and they want to get in and out, meal times can be a real feeding frenzy. For PCC, the challenge was bringing students into the dining halls to ensure they have proper ID and count them (to better manage meal projections and food costs).

PCC had turnstiles installed in both dining halls that were 20 years old and were at the end of their usable life. For a number of months, PCC staff researched various companies offering turnstile entrances and found the visual appearance of each of the products to be quite similar. “We needed someone to work with us to customize our entrances,” explains Amy Glenn, the college’s chief communication officer. “What brought us to Boon Edam was their willingness to sit down with us and modify their products to fit our needs.” The college wanted recessed scanners in each cabinet and a durable, plexiglass covering for protection. Cost was also factor. “The fact that the turnstiles are made in America cut our shipping costs and that made a big difference for us,” Glenn adds.

The request for cabinet customization was presented to Boon Edam’s engineering team for feasibility assessment and design. Details, such as the dimensions of the card reader, were used to ensure enough space was available inside the cabinet and to develop special brackets to hold the device in place. A custom cut-out was designed for the cabinet’s top and for the placement of the plexiglass. Drawings of these customizations were approved by PCC, then the extra materials were ordered and made as specified in the factory.

At Four Winds, the turnstiles were installed in January 2016. There are eight turnstiles at two separate entrances, but four units alone can handle 1,000 students in 15 minutes. “We don’t want our students waiting in lines,” Glenn explains. “We could have designed a huge lobby but our entrance size with this kind of high throughput is ideal.”

A tap scanner is used by the student to gain entrance with his/her PCC Smart Card. The system identifies the card itself has not expired, that the student is eligible to attend the meal, and that he or she has not scanned for the same meal at another venue on campus. If the student has forgotten his or her card, there is a keyboard and monitor connected to one of the turnstiles at each location for the student to use his or her campus login to gain access and open the turnstile. An attendant on duty oversees the entrance and assists students (and guests) as needed. 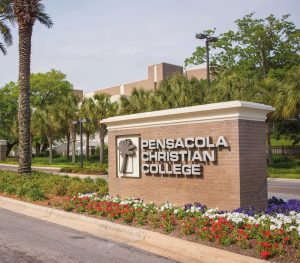 Pensacola Christian College opened 42 years ago and now have students enrolled representing every state and more than 50 foreign countries.

Another challenge PCC addressed was fine-tuning the amount of time the turnstiles remain unlocked, which can be adjusted at the site. If a turnstile is set to relock too quickly, distracted students may be slow to enter the turnstile after their authorization and bang against a relocked arm. Aside from the wear and tear this presents, the student would have to badge in again to gain entry (inflating the meal count) or request assistance from the attendant and slow down the line. Users, like PCC, can spend a few days observing line behaviors to adjust the settings to an optimal time interval.

“It’s been night and day right from the beginning, compared to our old entrances,” Glenn concludes. “Plus, we know we can get parts quickly, and mechanically the turnstiles have performed super well. Our team has been quite pleased, I’ve heard no complaints at all, and our students consistently are able to get to their meals with little or no waiting.”

PCC is located just off the warm emerald waters of Florida’s Gulf Coast. The school became a reality in 1974 when 100 students arrived at the college’s one building. Forty-two years later, students now represent every state and more than 50 foreign countries.