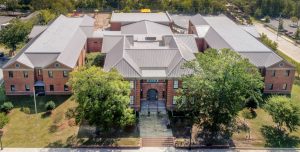 A standing-seam metal roof is installed on the historic Alexander II Magnet School.

“During an assessment, we discovered that the asphalt shingles were installed with no ventilation and heavy insulation,” says Jody Usry, president of Edifice Consulting. “It was designed for metal so with no ventilation, the shingles were burning up. And there was so much expansion and contraction that the nails were backing out in spots. It was decided that the best thing to do was retrofit with metal.”

The 138T standing-seam system allows metal roofing to be installed directly over asphalt shingles without an underlayment and without tear-off. The system is designed around the patented clip paired with the company’s 138T symmetrical standing-seam panel. Measuring 1 3/8-inches tall, the 138T is a two-piece mechanically seamed metal roof system.

A 3/4-inch airspace combined with vented eave and ridge material provide uninterrupted airflow between the two roofs, known as “above sheathing ventilation,” or ASV. Testing at Oak Ridge National Laboratory, Oak Ridge, Tenn., demonstrates a free-flowing airspace between a metal roof and shingles can reduce heat transfer by 30 to 50 percent.

Usry notes there were flat roofing areas with an internal gutter that were recovered with new decking and sloped to allow water to flow to an external gutter. Modified bitumen was applied over existing modified bitumen at low-slope areas after thermal scans were done to identify wet insulation. All internal gutters were replaced.

Pittman Waller Roofing installed the modified bitumen and 27,500 square feet of the 138T 24-gauge panels in PVDF Ash Gray. The panels were formed at the McElroy Metal manufacturing facility in Peachtree City, Ga. Because some spots of the decking were sagging, the roofers had to “shim” the roofing with 18-gauge framing. 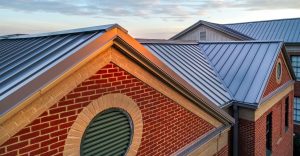 Alexander II Magnet School was completed in 1902. Several significant additions through the years have brought the entire facility up to 41,650 square feet. In June 2000, the school was named to the 11 Most Endangered Historic Places list created by the National Trust for Historic Preservation, Washington, D.C.

NFRC Elects New Members to Its Board of Directors

Power Efficiency the Next Frontier of Energy Savings