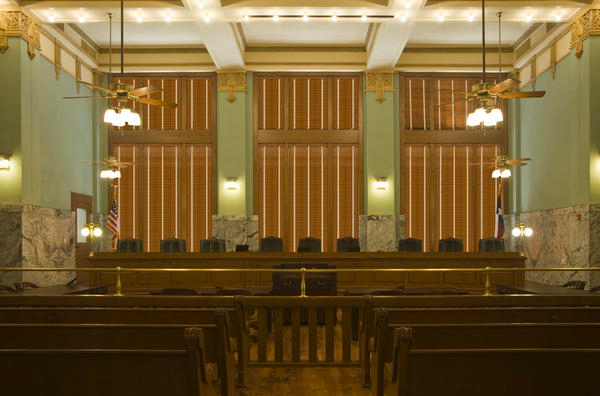 The restoration of the 162,360-square-foot courthouse—under the guidance of the Texas Historical Commission—was lauded as a marvel of historic preservation. 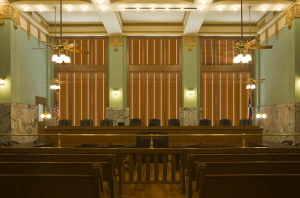 The restoration of the 162,360-square-foot courthouse—under the guidance of the Texas Historical Commission—was lauded as a marvel of historic preservation. PHOTO: SWFcontract

Custom window treatments would align with the project’s desired aesthetics and functionality. Southwest Decor chose Graber Traditions 2-inch Wood Blinds with cloth tapes to adorn the windows in the courtrooms. Slats were crafted from the finest North American basswood, kiln-dried to reduce warping, and stained and coated with a clear satin lacquer finish for a hand-rubbed appearance reminiscent of the courthouse’s original design period: 1910. The wood blinds were complemented by lineal-grained, smooth-sanded valances, also sourced directly from the sawmill and produced in the manufacturer’s Grayling, Mich., plant.

The Harris County Courthouse was recently restored to its former glory. Constructed of pink Texas granite and brick, the 6-story courthouse towered over the highest point in the modest Houston skyline by 100 feet at the time it opened. Designed in the Classical Revival style, the building is considered one of the most significant public buildings in Texas.

The restoration was desperately needed after decades of neglect, including deferred maintenance and ill-advised alterations. Over the years, the rotunda and skylit roof had been filled in; several grand staircases were removed; load-bearing walls were compromised; and much of the original ornamental plasterwork was covered. The original windows, wood casements or sash windows with prismatic glass, needed replacing. The original windows were replaced with insulated wooden windows of the proper proportion and historic appearance, featuring metal cladding and insulated glass. For historic authenticity, windows required wood window treatments.

The restoration of the 162,360-square-foot courthouse—under the guidance of the Texas Historical Commission—was lauded as a marvel of historic preservation. Adele Hedges, the chief justice, 14th court of appeals, remarks: “Before its restoration, the 1910 courthouse was dark and dreary with inefficient use of space and outmoded technology. [The architect’s] vision, talent and skill rescued this neglected landmark, recreating its former glory and transforming it into a cutting-edge business environment.”

Renovation of an Induction System with Active Chilled Beams

Be the first to comment on "Project Profiles: Government"