Seven-hundred-sixty windows were retrofitted with the Renovate Platinum Plus II system, adding an insulating glass unit with two lites of high-performance, low-E glass to the interior surface of the existing curtainwall. 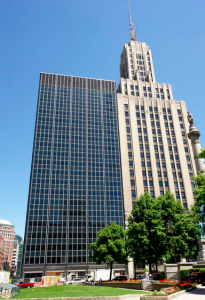 The $42-million project transformed a 20-story office building into a mixed-use complex with a 124-room hotel, 18 market-rate apartments, a restaurant, and health-care and hotel manager The Hamister Group’s corporate headquarters.

Jonathan Morris, AIA, of Carmina Wood Morris, said the exterior of the 55-year-old building looks the same as when it first opened in 1959, but the interior was completely rebuilt and repurposed. To make the building more energy efficient, the design team had planned to replace the original single-glazed curtainwall with new, insulating glass units; however, because the building was added to the National Register of Historic Places in 2012, the original glass and framing system had to remain in place and be restored.

“Improving the curtainwall’s energy efficiency and thermal performance were critical factors for the success of this renovation,” Morris says. “Knowing the building was going to be mostly hotel and residential units, we also needed a solution that would reduce noise from the street and light-rail system outside. The system we used was essential to not only working within the constraints of the historic-preservation criteria, but also accomplishing our other goals.

“It took about three months to complete the window retrofit,” Morris adds. “The New York State Historic Preservation officer we worked with has already referenced this project to a few other architects who are working on similar preservation projects.”