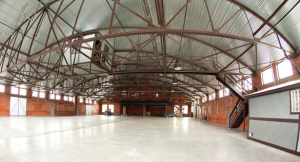 The hangar, which was named after WWI Pilot Major Doyen P. Wardwell, was built in 1934 and marked the completion of the airport that served as the new north-and-south airmail route from Billings, Mont., to Denver. The facility was used by the military during WWII. From 1954-72, the hangar was used as an indoor arena for community events. In the 1960s, part of the movie “The Hellfighters”, starring John Wayne, was filmed there. After its August 2013 retrofit, the airport hangar now is the main office for the Can Do Co.

The hangar is a unique historical building; therefore, the designer wanted to keep the heritage of the building intact while transforming it into an elegant, updated and functional facility.