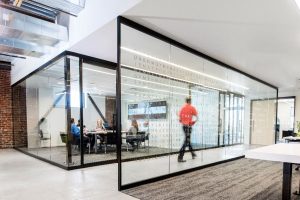 KSQ Design purchased the Gates Hardware Building in Tulsa’s Brady Arts District in late 2014 and moved its 63-member Tulsa staff to the 14,000-square-foot second floor of the mixed-use structure. (Eslick Design also is housed on the second floor.) The gut renovation of the 90-year-old building featured challenges, including building instability and the grading of the parking lot, which contained forgotten oil tanks from railroad cars.

The building is located immediately across from the main entrance of ONEOK Field where the Tulsa Drillers baseball team plays. The entry pays homage to the building’s origins with raw steel, spots of exposed brick and metal partitions throughout, which resemble peg boards commonly found in hardware stores. The historic “East End Experience” marquee (previously on the corner of the building) hangs in the double-volume lobby stairway. KSQ Design’s office features an open studio, glass-encased conference rooms with ballpark-themed names—Dugout, Bullpen and Press Box—to match the ballpark views, a full kitchen, community spaces and an open studio environment underscoring the creative culture within the firm. The office includes energy-efficient glass, LED lights, low-flow showers and sinks, and a water-bottle refilling station. 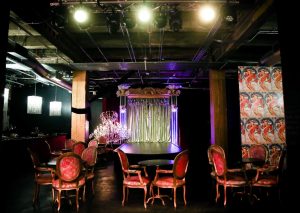 On the street level, the Gates Hardware Building is home of She Theater, a performance art and dance club.

On the street level, the Gates Hardware Building is home of McNellie’s Group and Marshall Brewing’s new sports bar and microbrew pub, Elgin Park, along with She Theater, a performance art and dance club. The downstairs also is 14,000 square feet.

The project was made possible by Brady Arts District TIFF funds. As David W. Short, AIA, project manager with KSQ Design told The Journal Record, “If it weren’t for the historic tax credits, the $3 million rehabilitation would not have been worth it.”