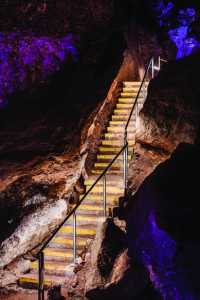 Because LEDs have no ultraviolet spectrum, an integrated LED railing system would eliminate any moss growth and could operate almost maintenance-free for many years. In addition, because it is designed to be field cut, the LED V-Rail Gen 2 System eased unique conforming issues found inside a living cave. Corrosionresistant stainless-steel posts offer a long-term solution and minimized the need for concrete pads throughout the cave. In addition, the stairway illumination only occurs where and when people are present; it is dimmed once they leave. 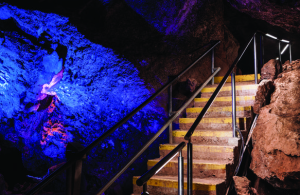 Located in rural, western Oklahoma, the Alabaster Caverns are the largest gypsum cave in the world open to the public. The caverns feature massive boulders of alabaster and a fine-grained mass of gypsum seen in pink, white and a rare black.

For more than a decade, visitors relied on a T-5 fluorescent handrail system to traverse the 330 steps down into the cave that extends 3/4 mile. However, the system began to corrode because of the extreme alkaline properties of the gypsum in the ground. Maintenance troubles that included lamps constantly burning out and lenses coming off the handrails quickly became a safety hazard and made the need for a new railing and lighting system apparent.

Because of environmental sensitivities, no cutting of the rail system during installation could be done inside the cave, meaning at least 10 to 12 trips per day per man up and down the stairs. The team also had to deal with bats regularly flying into their faces, rattlesnakes that lived near the cave’s entrance and an ongoing stream of tourists.

However, the modular railing system and pre-engineering plans allowed the crew to install about 50 feet of rail per day. Ultimately, 610 feet of handrails were installed within three and a half weeks versus an estimated six weeks.

Be the first to comment on "Project Profiles: Outdoor"