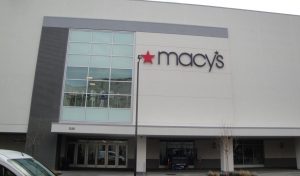 The Macy’s expansion and renovation includes a complete remodel of the 55-year-old storefronts, canopies, and entire core and shell.

The existing exterior was a red curtainwall composed of ceramic tile and areas where the cast-in-place concrete came forward to be in plane with newly framed walls as part of the renovation. It was imperative the new EIFS finish comprised of Dryvit’s Outsulation Plus MD integrated with these sections of the original wall.

As called for in the design guidelines governing Macy’s renovations, the EIFS cladding had to have a uniform texture in white and gray. The challenge for the architect was to somehow make a 55-year-old box and newly built box appear as though they had always been there. To realize these design requirements, the architect had to rely on the EIFS applicator delivering crisp reveals and sharp lines combined with minimal texture. The overall design employed a crenelated dark gray horizontal panel mixed with varying sizes of large white panels. 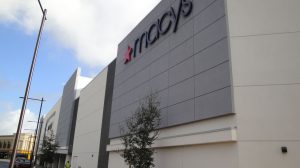 This 2-story 60,000-square-foot Macy’s underwent a core and shell expansion and renovation. Located at the popular Broadway Plaza Shopping Center, the project included a complete remodel of the 55-year-old storefronts, canopies, and entire core and shell.

A major challenge of the renovation was working in an existing retail space that needed to remain open. This stretched construction over a nearly two-year period. Another challenge was to provide a remarkable facelift when the store’s previous remodels had not been particularly well planned. In addition, the team had to take care not to allow debris to fall into an adjacent creek.

Be the first to comment on "Project Profiles: Retail & Mixed Use"