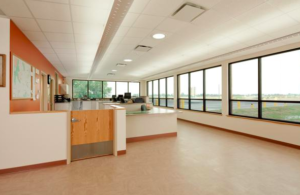 Port of Entry with its new glass in clear setting.

Hutton Architecture Studio specified a version of SageGlass that has four levels—2, 6, 20 and 60 percent—of visible light transmission (VLT). The electronically controlled glazing, which on this building faces south and west, allows agents to view outside of the building at any time of day without compromising their comfort or the safety of the drivers coming through the weigh station.

Tubular daylighting devices ensure the workspace receives plenty of daylighting. In addition, the south and west windows are connected to south and west photosensors, respectively, that automatically determine and set the appropriate VLT for the windows. The interior electric lighting also is managed by a photosensor, which dims according to the natural daylight levels. The photosensors may be overridden manually by the staff should the need arise.

The Torrington Port of Entry serves as a weigh station for the Washington, D.C.-based U.S. Department of Transportation on U.S. Highway 26 at the Nebraska/Wyoming border. Port of Entry agents ensure highway safety by monitoring commercial vehicle and driver compliance with state and federal laws. To effectively do their jobs, the agents need maximum visibility and an unobstructed view at all angles during all times of day in any weather condition. 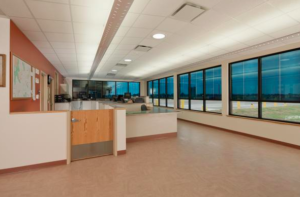 Port of Entry with its new glass in a tinted setting.

Because the weigh station had significant glare and visibility issues, agents had to wear baseball caps and sunglasses to view oncoming vehicles in the daytime through the large windows facing the road. The new design would be a prototype for other facilities, so the glazing and interior lighting conditions had to be handled with care. The sun-control problem couldn’t be easily solved with shades, blinds or other conventional controls because they would have blocked the view. With standard glazing, the building would have been in the same glare/visibility predicament.

Screen Rolls Out of Sight When Window Is Closed